Home Game Guides How to Recruit Archibald in Triangle Strategy 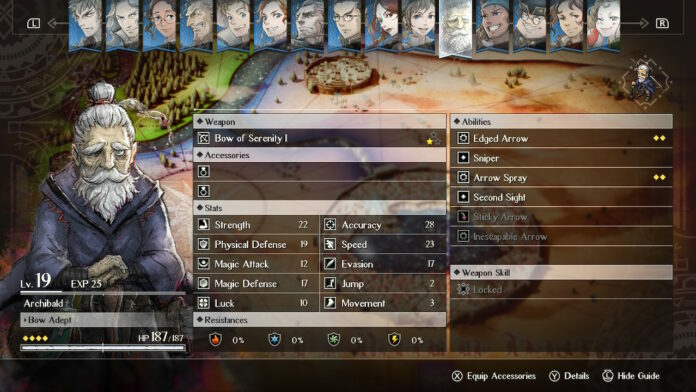 Shortly after the beginning of Triangle Strategy, Serenoa will gain access to the Encampment, where a variety of NPCs will offer their services to let him purchase items, unlock Quietuses and take part in Mock Battles.

These NPCs, however, are far from being nameless characters, as they can join the army as full-fledged fighters.

Here’s how to recruit Archibald, the old man who sells Quietuses and lets you promote units.

How to Recruit Archibald in Triangle Strategy

To unlock Archibald’s Character Story, you will have to bring Serenoa’s Morality to 400 and Utility to 500. Once this is done, you will see a new icon appear in the lower right part of the screen. Press the + button to access it, play the Character Story and finally recruit Archibald.

Archibald is among the best archers in the game, as he has increased range, compared to others, and can hit hard with one of his abilities that lets him strike while ignoring the enemy’s defense. The only downside to the character is that he is quite slow, so he won’t be acting as often as the other archers in your army.

How to Recruit Archibald in Triangle Strategy