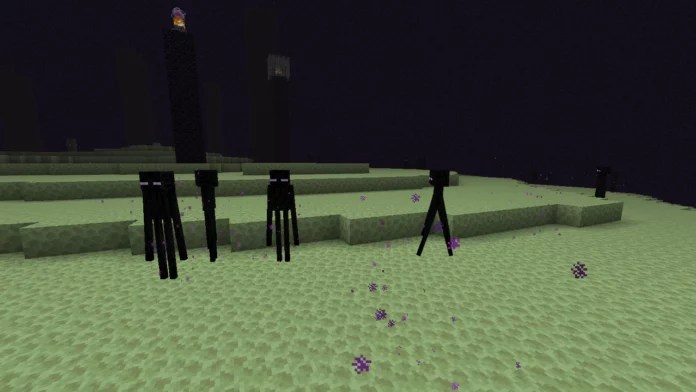 After defeating the mighty Ender Dragon, Minecrafters can access the End realm freely and explore the end islands located in the terrifyingly beautiful void. The End realm is filled with creepy creatures called enderman.

Enderman is a unique mob that spawns in all three dimensions. However, they are natives of the End. Endermen are the only Minecraft mob that spawn naturally in the End dimension. Because of this, they have an extremely high spawn rate.

For this build tutorial, we will follow Minecraft Bedrock YouTuber JC Playz’s enderman farm video. If not already defeated, you must defeat the Ender Dragon before building an enderman farm.

Outside of the main end island, there is nothing but void space for almost 900-1000 blocks of distance. Players can use this empty area to build an enderman farm. To create this farm, you will need the following items:

Cover it with slabs after the collection system is ready and start building a tall tube on top. You should go at least 35 blocks high to make sure endermen are one hit away from death. Create a spawning platform of 9×9 with a 3×3 empty area at the centre. Surround the sides of 3×3 with trap doors.

At the centre of the platform, you will have to spawn an endermite and trap it into a minecart. Since enderman are attracted to endermite, they will run towards the centre and fall into the killing chamber. Due to fall damage, players can kill endermen with one sweep of sword and collect its drops.

Watching JC Playz’s enderman farm tutorial is highly recommended as it has a simple and brief step by step guide. You can watch the video for detailed information on building this farm.

Also Read | How to Get Wither Rose in Minecraft Bedrock

How to Make an Enderman Farm in Minecraft Bedrock