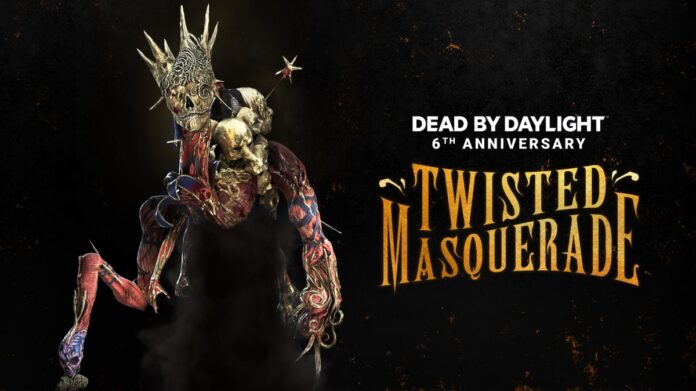 It is Dead By Daylight’s 6th anniversary and it is time to party. To mark the occasion, a two-week long event started on June 16th: Twisted Masquerade. During this time Survivors and Killers will play in lavishly decorated realms, and enjoy earning many exclusive rewards. These gifts include Twisted Masquerade masks for 12 Survivors and Killers, and anniversary-themed Flashlights, Med Kits, Toolboxes, and Bloodpoint offerings. A new tome has also arrived and in it players can unlock exclusive cosmetics for the two new Dead By Daylight characters Haddie Kaur and The Dredge. Find out below how to get the Dredge Masquerade Colours cosmetic in Dead By Daylight.

The Dead By Daylight Twisted Masquerade event offers players the chance to unlock a range of anniversary-themed cosmetics and consumable items. Items such as Toolboxes and Med Kits can be found in the Bloodweb, and in Chests during a match, while masks are unlocked by finding invitation totems hidden in each game.

Related: How to Unlock All Masks in Dead By Daylight Twisted Masquerade Event

The Dredge’s Masquerade Colours cosmetics are unlocked by completing Masquerade Tome challenges which is available only during the anniversary event. Players must complete Survivor and Killer challenges in both levels of the Tome to unlock each piece of the cosmetics.

There are 2 separate parts to the Masquerade tome- two regular levels and some Community Challenges. Every player contributes to the community total to unlock some of the most sought-after pieces of Haddie and The Dredge’s anniversary cosmetics. The tome challenges are all event-inspired and include hitting a Survivor while playing as The Dredge, completing event-themed generators, and hooking Survivors on anniversary hooks.

Each challenge awards players with Bloodpoints, and as players progress they also unlock pieces of either Haddie or The Dredge’s Masquerade-themed cosmetics. Once the two weeks of festivities are over, both tomes should be completed and all rewards claimed.

That is all you need to know about unlocking Masquerade cosmetics forThe Dredge during this special 6th Dead By Daylight anniversary! Good luck.