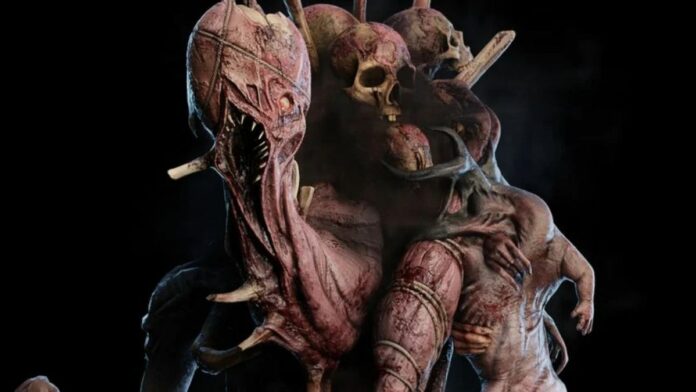 Dead By Daylight announced the release of a brand new chapter arriving in June 2022: Chapter 24, Roots of Dread. The upcoming chapter brings an original Killer and Survivor, and a whole new realm to play in. Survivor Haddie Kaur is a brave Canadian-Indian psychic who conducts investigations for her podcast. New Killer, The Dredge, is an inhuman creature created from nightmarish darkness. Find out more about his perks and abilities below!

Perks and Abilities of The Dredge in Dead By Daylight

The Dredge stands 32 meters tall and utterly grotesque, its body formed out of suppressed darkness and the writhing mass of butchered corpses. This extra-dimensional creature’s primary weapon is its Knotted Apendage, a weapon formed from the body parts of a once-happy community.

The Dredge’s Power and Special Abilities

The Dredge’s power is Reign of Darkness, giving The Dredge the ability to transport to any locker while its special ability The Gloaming is activated. This Killer starts the game with 3 Tokens, and each time it transports to a locker, a Token is used. Tokens will replenish when The Gloaming’s 12 second cooldown has ended.

Once The Gloaming is activated, Dredge leaves behind a husk, The Remnant. Dredge is able to return to this Remnant unless they transport to a locker or a Survivor touches it, making it fade away.

Survivors can put locks on the lockers (one lock per locker per trial), making it so The Dredge cannot transport to them. The Dredge can break the locks using its primary weapon.

The Dredge can use another special ability Nightfall which lasts for 60 seconds and forces Survivors to play in darkness. Nightfall also grants the Undetectable status to Dredge, and increases the teleportation time between lockers. Nightfall meter fills faster when:

Those are all the perks, powers, and abilities of The Dredge as we know so far, according to how it is currently in the PTB. These may be subject to change once the release comes in June 2022. We will let you know if anything changes when Dead By Daylight Chapter 24 arrives.

All Dredge Perks and Abilities in Dead by Daylight – Explained