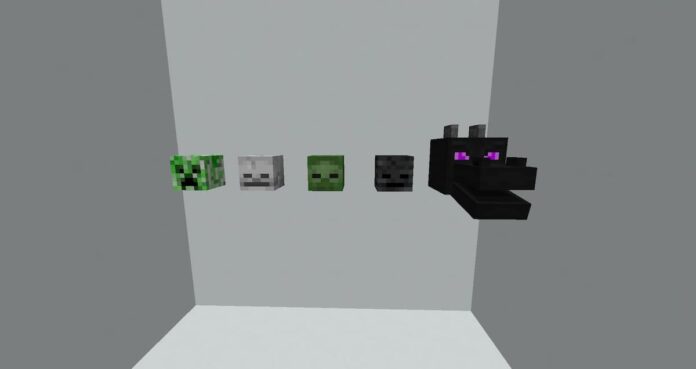 When talking about decorations, Minecraft has lots of blocks and items just for beautifying builds. Out of all decorative blocks, mob heads are one of the rarest to obtain. This guide will help you get mob heads in Minecraft Java Edition.

As obvious from its name, a mob head is simply a headgear featuring a mob’s head. In vanilla Minecraft, there are only five mob heads:

Here is how you can get all the mob heads in Minecraft:

If you didn’t know, charged creepers are a special variant of creepers created after lightning strikes. As the chances of a lightning bolt naturally hitting a creeper is minuscule, you will have to use a trident enchanted with Channeling to convert creepers into charged creepers.

Channeling enchantment helps you create charged creepers during thunderstorms. Beware of charged creepers as they cause a more powerful explosion with a bigger radius than regular creepers.

Related: How to Summon the Wither in Minecraft Bedrock

Mob heads can be used as headgear but do not provide any armor points. Instead of wearing them, you can use mob heads to decorate the walls of your base.

How to Get Mob Heads in Minecraft Java Edition