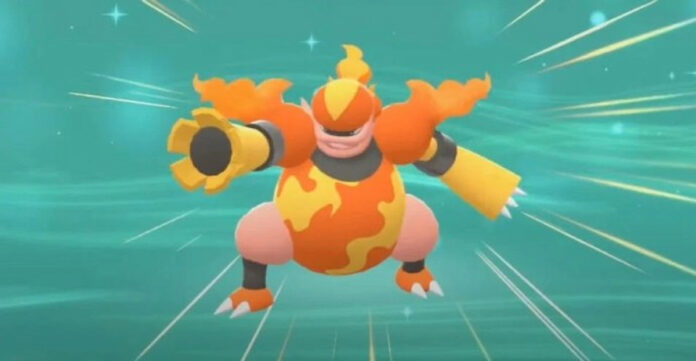 Magmortar’s special attack stat makes him a moment powerful Pokémon in Brilliant Diamond and Shining Pearl. It’s amongst the few Pokémons that boasts of fine sleek designs and is very competitive as well.

While Fire kinds are truly strong and competitive Pokémons, Magmortar is an entirely different beast compared to others. He’s unpredictable and is sought by many players.

He has an overall stat of 540 which will definitely showcase its presence in either casual or competitive battles. Magmortar also possesses a move pool with a coverage that can check a wide variety of Pokémons in some matches.

So if you’re seeking a Fire type Wallbreaker Pokémon to add to your team, then look no further than Magmortar. And in this article we’ll be showing you how to get it in Brilliant Diamond and Shining Pearl.

How to Get Magmortar

Since Magmortar is an exclusive Pokémon in Shining Pearl, the only way to obtain it is if you own a Brilliant Diamond and perform a trade.

The first thing you’ll need to get Magmortar is a Magby. You can’t encounter a Magmortar in the wild, you must capture its base Pokémon and evolve it.

You will also need to have a special hold item known as Magmarizer, and you can get this item from a Magby and if you’re lucky, you could get both items at once.

In finding the Magby, it’s worth noting that it is a rare spawn that can be seen in caves and caverns in the Grand Underground. Below are the three places where you can encounter a Magby:

Once you’ve gotten a Magby and a Magmarizer, then you have to reach level 30 with the Magby and evolve it into a Magmar. Yep, that’s right. There are three stages to this. First a Magby, Magmar, then Magmortar.

So after having a Magmar, you can now evolve into a Magmortar. But you’ll need to have a trade partner for this next step. It could be another Switch unit you already own or a different player entirely, it’s your choice.

You can then trade your Magmar whilst holding a Magmarizer and it will evolve into a Magmortar.

How to Get Magmortar in Pokémon Brilliant Diamond and Shining Pearl