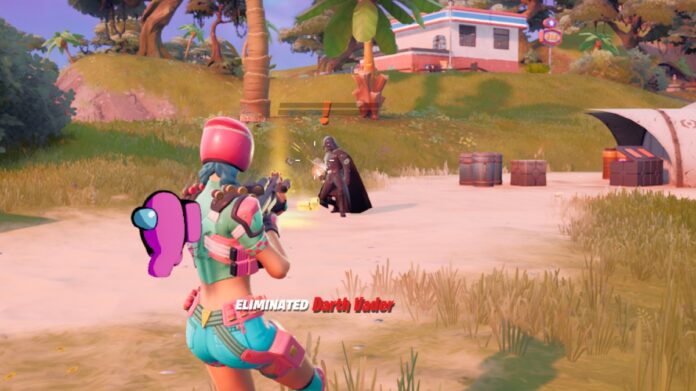 Darth Vader and his Imperial Army has have returned to Fortnite! The Zero Point has brought Vader to the world of Fortnite, giving players the chance to defeat him and take his iconic red lightsaber. Watch where Vader and his Stormtroopers land their ship, and see if you can fight him to the death and take his weapon. Follow this guide and find out how to get Darth Vader’s mythic lightsaber in Fortnite.

To get his red lightsaber, you must defeat Darth Vader. He and his Stormtroopers land in a different random Imperial Docking Bay every match so you will have to watch to see where he lands. Each of the 5 docking bays has Imperial chests which contain an E-11 Blaster Rifle, Impulse Grenades, and a Med Kit. Grab a weapon before Vader and his Stormtroopers see you as they will attempt to fight you on sight.

If you defeat Vader you get to keep his deadly red Lightsaber for the rest of the match, so come prepared with a weapon, ammo, and meds. If you manage to open an Imperial chest the Impulse Grenades are really useful for getting some distance between you and Vader. Be warned, however, he will come after you.

Related: Where to Find Darth Vader in Fortnite Chapter 3 Season 3

Vader can also use the Force and drag you towards him- be ready for this and have a short range weapon to hand, or use an Impulse Grenade to get some space again. Vader can also throw his saber but doesn’t do that too often. He has a lot of shield and health but as long as you keep maintaining distance and healing if you need to, it is achievable.

If you are not sure where Darth Vader landed you can find him by watching for the marker as you glide down.

That is how you find and defeat Darth Vader and get his mythic rarity lightsaber! Good luck and may the Force be with you.

How to Get Darth Vader’s Mythic Lightsaber in Fortnite