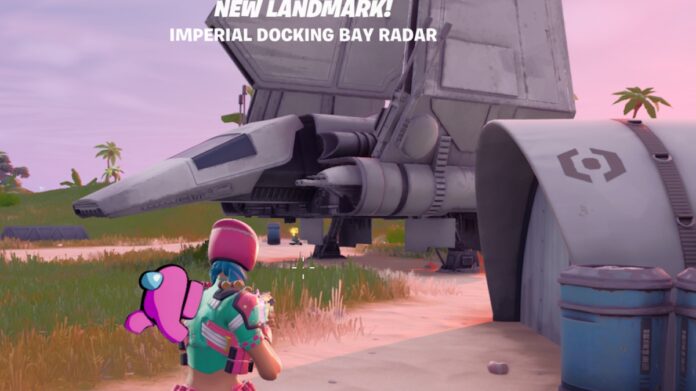 The Imperial Army has landed in Fortnite! Darth Vader has brought his Stormtroopers back to Fortnite once more thanks to the Zero Point acting up. This gives players the chance to take on Darth Vader and obtain his infamous red lightsaber! Vader and his troopers are landing at an Imperial Docking Bay in every match so if you want to track him down (or avoid him at all costs), just follow our guide. Here are all the Imperial Docking Bay locations in Fortnite Chapter 3 Season 3.

Every match, Darth Vader and his Stormtroopers land in a different random location. There are 5 of these locations- Imperial Docking Bays- around the map. Each of the docking bays has storage containing Imperial chests which each hold an E-11 Blaster Rifle, Impulse Grenades, and some healing items like a Med Kit.

Unless you are specifically looking to fight Darth Vader and his Stormtroopers, any of the docking bays are good landing spots to pick up a Star Wars weapon. If, however, you are looking for a tough fight then find the docking bay where Darth Vader landed and try your luck at getting his lightsaber. It is easy to see where he lands if you watch his ship at the very start of the match before you get off the Bus.

The Imperial Docking Bays are located in these areas:

Related: All About Logjam Lotus in Fortnite Chapter 3 Season 3

Those are the locations of every Imperial Docking Bay available right now in Fortnite Chapter 3 Season 3! Good luck and may the Force be with you.