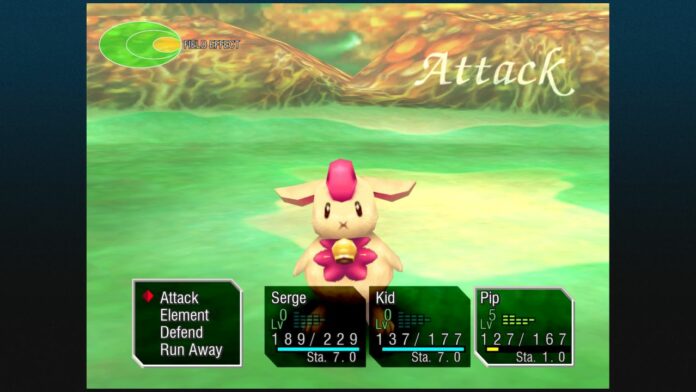 Chrono Cross: The Radical Dreamers Edition features a lot of very interesting characters coming with their own unique abilities. Most of the cast is relatively straightforward, but others, like Sprigg, require some additional effort to become effective in battle.

Among the most unique characters in the game is Pip. This cute little monster is not particularly strong in his base form but can become quite powerful after evolving into his advanced forms

Here’s how to evolve Pip and what are the differences between all the available forms.

How to Evolve Pip in Chrono Cross: The Radical Dreamers Edition

When Pip joins your party, which requires you to release him from his cage in Viper Manor and interact with him multiple times aboard the S.S. Invincible, he will be in his base form, which comes with mediocre stats. By using certain Elements in battle, however, he can evolve into different and more powerful forms.

While in his base form, Pip can evolve into Angel form, which is primarily good at Magic, if he uses White, Yellow and Blue Elements or into Devil form, which is primarily good at physical attacks, if he uses Black, Red and Green Elements. Once the threshold has been reached, he will evolve into either form during a battle that makes you earn a Star Level.

Once in either Angel or Devil form, Pip can further evolve using the same Elements used for evolving into the first form into Archangel and Archdevil forms. If you use Elements opposite those used to obtain the monster’s current form, Pip will turn into a Holy Beast, which is decent at both using Elements and physical attacks. Once Pip has evolved into any form, there is no way to make him revert to a previous form, so you have to think carefully about how to evolve the little monster.

How to Evolve Pip in Chrono Cross: The Radical Dreamers Edition