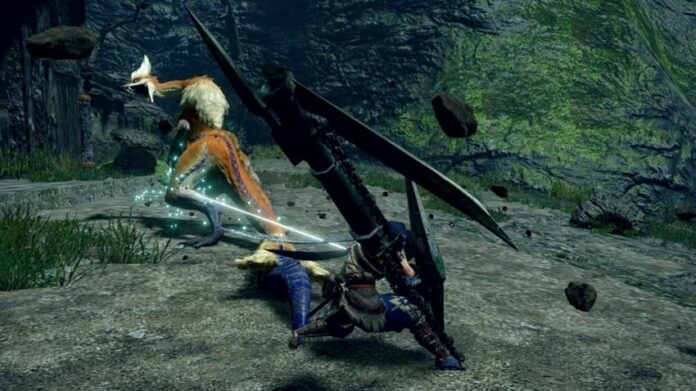 The Monster Hunter Rise January playable demo includes four different quests. Two of these quests have been included to teach players about the game’s basics and new mechanics like Wyvern Riding, but the other two throw them right into the thick of the action, letting them hunt two different monsters – Great Izuchi and Mizustune.

Between the two, the Great Izuchi is definitely among the easiest, as it has fewer special attacks and easier to recognize attack patterns. Still, it can pose quite a challenge to new hunters, so if you are a newcomer to the series, you have wirebugged your way to the right place. Here’s everything you need to know about Great Izuchi in Monster Hunter Rise.

The Great Izuchi is a Bird Wyvern that has evolved its tail to a scythe-like shape, which also represents its main weapon. The Great Izuchi also always roams the land together with smaller Izuchis which will always help him in a fight. So, you will be actually fighting three monsters, although two of them do not pose much of a threat if you know how to deal with them the right way.

The Great Izuchi has three different attacks. The first one is a Tail attack where it swings its tail vertically to crush hunters. This attack is easy to avoid by dodging to the side, as the swing doesn’t have a whole lot of horizontal range.

The second attack is a ranged attack that causes elemental blight. The attack can be difficult to avoid if you’re caught unaware, so always keep an eye on the Great Izuchi, even if you are focused on taking down the smaller Izuchis.

The third attack is a combination attack performed by the Great Izuchi together with the two small Izuchis. Since the three monsters enter a formation that covers a lot of ground, avoiding this attack entire can be very difficult. The only way to prevent the Great Izuchi from unleashing this special attack is by eliminating one of the smaller Izuchis as quickly as possible.

The Great Izuchi doesn’t have a big moveset, so it becomes easier and easier to recognize which attacks it is about to unleash. The only true annoyance during the fight are the smaller Izuchis, which you should take down as quickly as possible. They do respawn after some time, but the respawn time is so long that you will have enough time to take down the Great Izuchi before they have a chance to appear again.