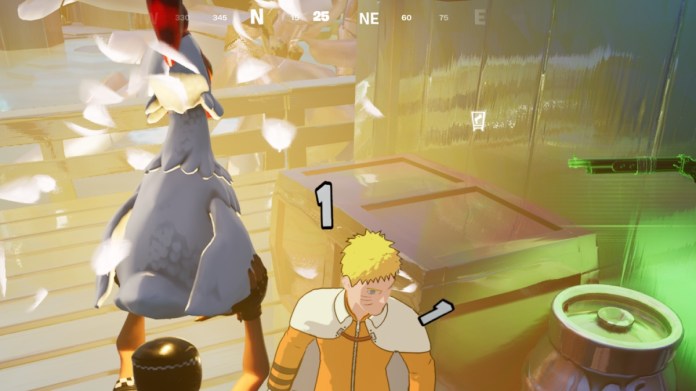 Chickens have been part of the Fortnite experience for years, but only recently have they begun to fight back! The feathery wildlife can be hunted for meat to give players a small HP boost, or they can drop loot if they glow purple or gold. Did you know that chickens can be used to deal damage to other players? Find out below how to deal damage with a chicken peck in Fortnite.

How to Deal Damage Using a Chicken in Fortnite

Chickens in Fortnite come in a few different varieties. There are regular chickens who wander the island, and they come as passive or aggressive. Aggressive chickens will run at you and peck you, dealing damage. There are then also glowing loot chickens who will drop a weapon of corresponding rarity when hunted.

Chickens can be used to float about, as they are carried and flap their wings, and they can also be used as weapons! They are not very effective weapons as they only deal 1 HP damage, but it is pretty funny to attack another player with a chicken.

If you are shot while holding a chicken, you will drop it, so you will have to try to pick up the chicken again. This means that getting this challenge done is pretty hard unless you manage to find an AFK player or a bot to try to attack with your pet chicken.

Players may find it easier to attempt this challenge in a squad match where you have other team mates to protect you. Try it in a Team Rumble or 40V40 match! If that is not helpful, try finding an AFK player when you jump from the Battle Bus last, taking a chicken to them while they float or stand alone. It is also possible to complete this quest by attack a Wolf or Boar with a chicken!

Related: How to Complete All Bytes Quests in Fortnite

To deal damage with the chicken you just need to approach the player while holding the chicken, and let the chicken do the work. The chicken will peck the other player, dealing 1 HP damage!

That is all you need to know about dealing damage with a chicken peck in Fortnite! Next up, why not find out how to find and use a Portable Launchpad in Fortnite? Good luck!

How to Deal Damage with a Chicken Peck in Fortnite