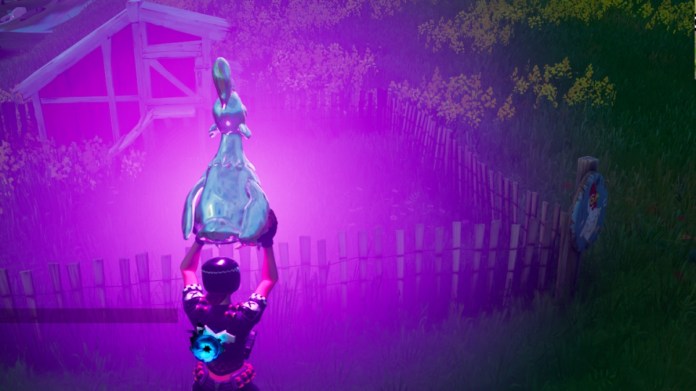 Fortnite has some fun interactive wildlife to play about with, including wolves, boars, birds, and chickens who roam the island. The chickens can be caught, and used to float about, or killed for loot and meat (healing item). There are currently glowing chickens who will drop Epic or Legendary loot if you killed one. Find out below how to find glowing loot chickens in Fortnite!

As there is a special quest list available right now – Avian Ambush Quests – it has never been more important to find the Epic rarity and Legendary rarity loot chickens. For one of the Avian Ambush quests players must find and kill 20 glowing loot chickens. These can be spotted by seeing them glow with a purple colour (Epic) or golden colour (Legendary).

These chickens can be seen from the air as you glide in to land, or can be spotted from a small distance. There are a couple of different types of chicken to watch out for- passive ones and aggressive ones. Aggressive chickens are much like the zombie chickens we would see during Fortnitemares. They attack on sight and will peck you, dealing damage.

Most chickens, specifically the passive ones, will run away in a panic when approached by a player. If you are trying to catch one you will have to run after it until it pauses, or build around it to trap it. If you are just trying to kill it for its loot or meat then it does not take much fire power to do so.

Glowing loot chickens are found in great numbers near Fort Jonesy, but can actually be found all around the island. During Avian Ambush Quest week they have higher spawn rates, so you may actually see more glowing chickens than regular chickens!

That is all you need to know about finding the glowing loot chickens in Fortnite! Next up, why not check out how to deal damage to Loot Llamas in Fortnite? Good luck!

How to Find Glowing Loot Chicken in Fortnite