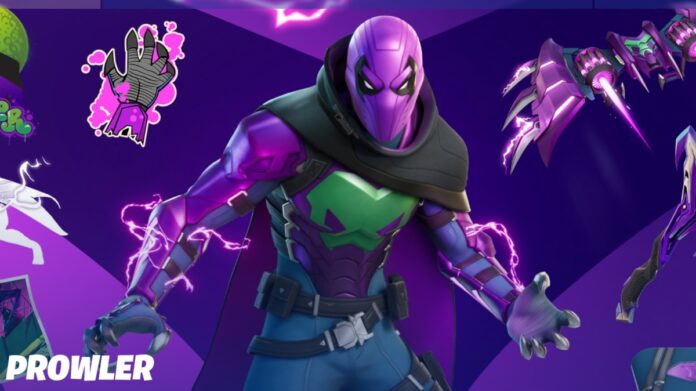 The Prowler skin is now available to unlock in Fortnite Chapter 3 Season 2! This Marvel skin is not available in the Item Shop, or through the Battle Pass, instead it can only be unlocked by completing various quests. Find out more information below!

Completing each quest unlocks a Prowler item including a spray, emote, loading screen, pickaxe, and more! Players must complete 3 of the quests to unlock the actual Prowler skin, and complete all 7 quests to gain his Slash and Smash emote.

Prowler’s full set of quests and rewards are:

Players will no doubt want to complete most of the challenges in as few matches as possible so here are a few hints and tips! The best place to drop is one that is relatively quiet and with lots of chests to complete the challenge to open 7 chests before taking damage. Drop into The Daily Bugle to complete the spray quest, and take advantage of the fact there are a lot of chest spawns. Here it is also possible to find a Red Toolbox and find a cow-catcher or some tyres to mod a vehicle and drive it out of the area for 500 meters.

If there is no mod there try a garage in nearby areas. It is pretty easy to get the Gold Bars as you play too- just smash up sofas, beds, and washing machines, and open Chests. For more tips on how to get Gold Bars quickly just follow our guide. We also have a great guide on how to get your hands on a thermal weapon so you can complete the headshot challenge with ease.

Dealing damage while sliding can be achieved in the same match, just as long as you have practiced your sliding by using our guide right here. Finally the most tricky quest is the collection of 3 different weapons of Epic rarity or above. As the quest suggests, each weapon must be a different type, so if you have an Epic (or better) assault rifle, then collecting an Epic (or better) Thermal Scoped Assault Rifle will not count. The easiest way to achieve this one is to spend some Gold Bars on upgrading three different weapons to Epic rarity, but it will be expensive!