Home Game Guides How to Find Thermal Weapons in Fortnite 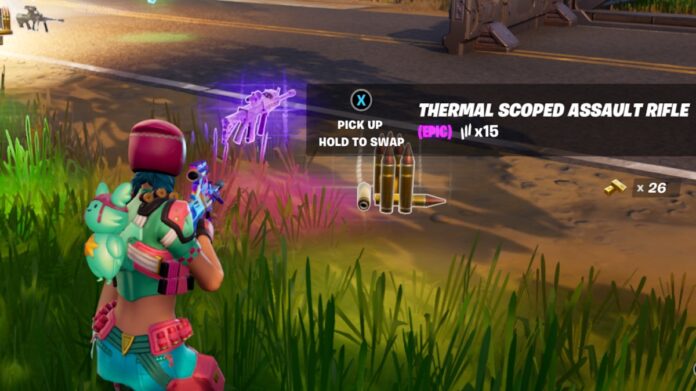 Where to Find the Thermal Weapons in Fortnite

Of course you could always be lucky enough to find one by eliminating an opponent who is carrying one. They come in Rare, Epic, Legendary rarities only.

There are two other places you could find this weapon. The first is on the Airship above Coney Crossroads. To obtain this weapon you must defeat Huntsman Saber who will then drop a Legendary Thermal Scoped Assault Rifle.

It is best to pick a fight with this boss only when fully shielded up as he is a pretty fierce opponent! He is always found on the airship above whatever named location is holding the battle between the IO Forces and The Seven. Once you defeat him you will have the best Thermal Scoped Assault Rifle you can get your hands on!

Another way to obtain this weapon is to defeat the IO Hunter at the final stage of the battle between IO Forces and The Seven. He is easier to defeat than the Huntsman Saber but you may have other opponents, plus some IO Guards to contend with too! Once he is defeated he drops an Epic Thermal Scoped Assault Rifle.

Once you have your weapon, complete the quest by hitting opponents with 3 headshots, using the Thermal Scoped Assault Rifle and gain your reward.

How to Find Thermal Weapons in Fortnite