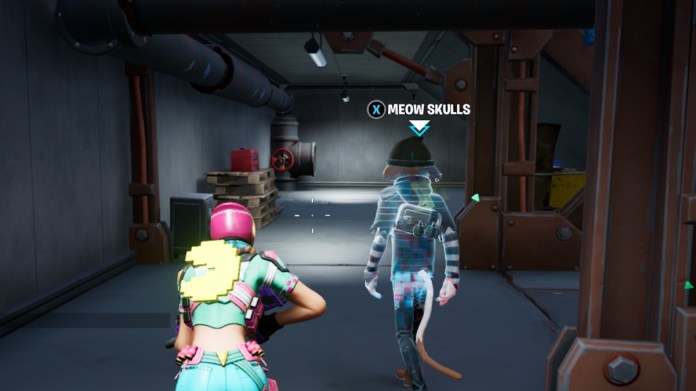 Fortnite has multiple NPCs who offer items for purchase, or services such as Storm Circle Forecast, or Prop Disguise. A select few of these NPCs can also be hired as a team mate who follows you around and attacks opponents. Previous to Chapter 3 Season 4, these characters were used as distractions or to alert you to the enemy but now players can communicate with them. Find out below how to communicate with a hired character in Fortnite.

How to Hire and Communicate with a Hired NPC

In Chapter 3 Season 4 there were 6 NPCs who could be hired as team mates. The hire costs 100 Gold Bars, and only one character could be hired at a time. These characters can follow you, fire at opponents or wildlife, but can not build, get in a vehicle, or give you ammo or healing items. These NPCs can be recognised from afar by the icon of a person, instead of the three dots other NPCs have.

Approach the character and tap the interact button, then select ‘Hire’ and pay 100 Gold Bars. The NPC will now follow you with their weapon out, and scout the area.

A new feature introduced in Chapter 3 Season 4 is the ability to communicate with the hired character. These are very basic communications and, unlike with a human team mate, not as useful as Squad Comms which were also a new feature added during this season.

Related: How to Find and Use Holo-Chests in Fortnite

Press left on your controller’s D-Pad to see all the available commands. There used to be a ‘Dismiss’ option, but due to a bug this has been removed. Apparently, when an NPC was dismissed as a player was eliminated, the player would gain a free ‘win’ if the opponent their were spectating won the match. Now there are only 3 commands to use with a hired character:

Related: How to Find Supply Llamas in Fortnite Chapter 3 Season 4

These extra commands are useful if you find your NPC team mate is wandering around too much and giving your position away, or if they do not spot an opponent before you do. Unfortunately they do not respond to the Request comms, or the Squad comms, only their own specific 3 commands.

That is all we have on the hired character communications! Next up, why not find out where all the NPCs can be found in Fortnite Chapter 3 Season 4? Good luck.

How to Communicate with a Hired Character in Fortnite