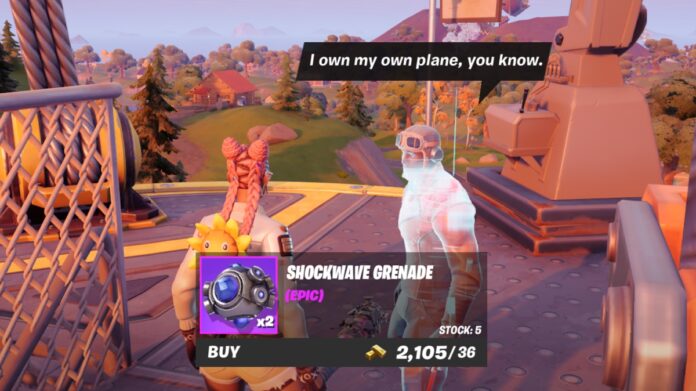 Non-playable characters (NPCs) in Fortnite are found walking around the map in specific areas. Some can be hired as a teammate, some can be challenged to a duel, others can help forecast the next storm circle, and they all have items for sale. Most of the NPCs from Chapter 3 Season 3 have returned with a few notable exceptions. There are also a few newbies arriving for Chapter 3 Season 4. Find out all NPC locations in Fortnite Chapter 3 Season 4 below!

Players can tell there is an NPC in the vicinity because a speech bubble with 3 dots appears on the mini map. Keep a look out for this as it will tell you exactly where the NPC is standing at that moment. Each NPC sells different items or offers different services. Only one Non Playable Character can be found at a particular location at a time.

Check each image below and its description for what each NPC might have to offer when you approach and interact with them. Every one of the NPCs will automatically give you a small healing gift when you speak to them, which is usually some Small Shield Potions, Large Shield Potions, Bandages, or Med Kits.

Cryptic is found in the airship above Rave Cave. He will sell you a Shield Keg, or is available for hire as a team mate.

Beach Bomber is at Lil’ Whips’ Ice Cream Parlour in Coney Crossroads where she sells Boogie Bombs and a Prop Disguise. Prop Disguise turns you into an object for a small amount of time, or until you draw a weapon or get shot.

Guac is at his restaurant as usual, selling Prop Disguises and Chug Splash in Greasy Grove.

Mancake is at Rocky Reels selling The Dub shotgun, and Shield Kegs.

Find Bao Bros in a 1 Key Vault by Loot Lake, west of Coney Crossroads. He is selling an EvoChrome Burst Rifle and EvoChrome Shotgun, or a rift activation.

Blackheart is still on his ship (which is now in the air!) at Lustrous Lagoon where he sells Prime Shotguns and Chrome Splash.

This guy was new last season and is still walking about inside a garage at Chonker’s Speedway where you can hire him, or buy a Rapid Fire SMG.

Only one of these guys spawns at Fort Jonesy at a time. You won’t be able to know which one until you visit them! They each offer slightly different items. Relaxed Fit Jonesy, for instance, sells Firefly Jars and is available for hire as a team mate. Bunker Jonesy sells Rapid Fire SMGs and is also available to hire.

Related: How to Complete All Paradise Quests in Fortnite

Rustler is hanging out with the wild hogs at Shifty Shafts and is selling the Boom Sniper Rifle, or the chance to tip the Bus Driver.

Fishstick is at his restaurant at Sleepy Sound where he sells Chug Splash, or is available to hire as a team mate.

Kyle can be found Logjam Lumberyard. He sells a Port-a-Bunker, or a Chug Cannon.

Related: How to Obtain the Chromebrella in Fortnite

Only one of these NPCs spawns at The Temple (near The Daily Bugle). Find Sunbird at daytime and Moonhawk at night. The items vary but you can get a Shadow Tracer or a storm circle forecast.

Either Meoscles or Kit appear at the Scratch Pad west of Reality Falls. Kit is selling a Lever Action Shotgun or is available to hire.

Evie is at Syndacite Shoals, the island east of The Daily Bugle, and is available to activate the rift, or to sell you Boogie Bombs.

Related: How to Perform a Slide Kick in Fortnite

Panther can be found at the large Gas Station between Sanctuary and Rocky Reels selling a Suppressed SMG or a storm circle forecast.

The Underwriter is found at Tilted Towers selling Large Shield Potions or a healing top up.

Sabina can be found at the large house near the coast called Shell Or High Water, located between Logjam Lotus and Sleepy Sound. She offers a DMR or the chance to start a Bounty.

Maximillian is new to this season and can be found on the Floatie Boaties south of Shifty Shafts. He can sell you Impulse Grenades or a Chrome Splash.

Those are all the NPCs who appear in Fortnite Chapter 3 Season 4 so far! If any more are added throughout the season we will keep you updated. Next up, find out where to find and how to defeat Herald in Chapter 3 Season 4. Good luck.