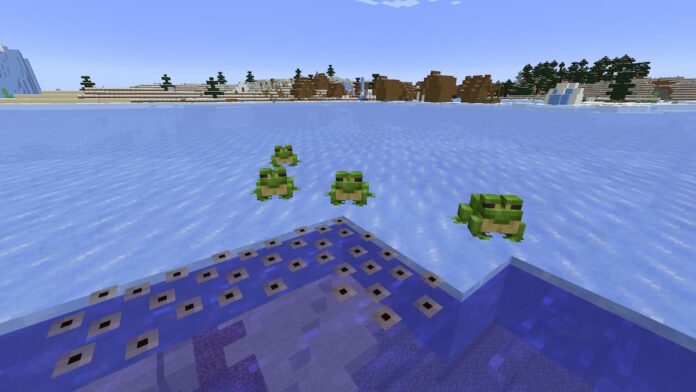 The Wild Update brings adorable frogs to the world of Minecraft. Players have known about frogs since 2019 as they were shown as part of revamped swamps for biome vote held at MINECON 2019. The Wild Update aimed to bring the wilderness to the game, making it the perfect opportunity to add frogs.

Frogs are the second amphibian mob in Minecraft. Players can find frogs in three different colors: green, white, and orange. They are found in numerous Overworld biomes, and their color will vary depending on the temperature of a biome.

Like most other animals, frogs also breed, and here is how to breed them in Minecraft.

Minecraft Frogs: How to Breed Them

To breed frogs, you will need slime balls in Minecraft. Earlier, Mojang had plans to add fireflies as the food for frogs. However, the idea was scraped off as fireflies can be poisonous to real-life frogs. Because of this, frogs are now bred using slimeballs.

You can breed a pair of frogs by feeding slimeballs to both. The best way to get slimeballs is by killing slimes. You can find slimes in slime chunks and swamp biomes at night. Use slimeballs on two frogs to make them enter love mode and then breed.

Related | How to Find a Slime in Minecraft

Like sea turtles, frogs also lay eggs in Minecraft. After entering love mode, one frog will search for nearby water blocks and lay eggs called frogspawn.

Also Read | How to Get Froglight in Minecraft Bedrock

How to Breed Frogs in Minecraft Bedrock Edition