Home Guides How to beat Oceanid in Genshin Impact 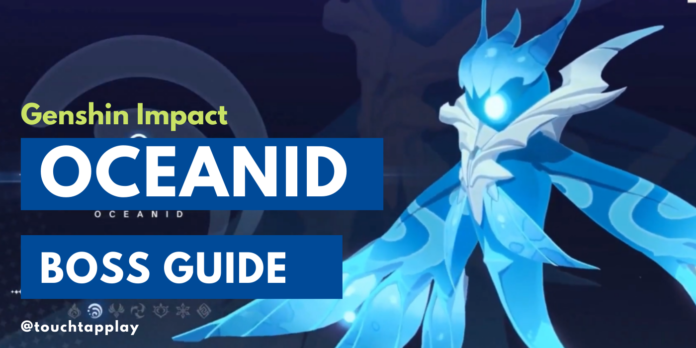 Being a roleplaying game, Genshin Impact offers a surfeit number of bosses with profound battle settings and uniqueness – that comes with each fight. Rhodeia of Loch, also known as the Oceanid in the Genshin Impact community is a normal boss found in the Bishui Plain of the Liyue region.

The Oceanid boss in Genshin Impact might come as an unsurmountable battle for new players. However, if you know the ins and outs of the battle – it becomes a rather gimmicky fight.

In the entire fight, Rhodeia of Loch or Oceanid will never touch the ground – she will summon water monsters. Players have to defeat these monsters in order to lower the Oceanids health bar. Now, that the aim of the fight is clear – let us talk about the arena where you fight the Oceanid.

The Oceanid boss arena is made of many square platforms combined together, and whenever the players defeat two batch of water monsters – two blocks of the floor will sink. So, the best strategy to avoid getting yourself drowned is to run towards any of the corners – and when the sinking is in the process get to the central arena.

In the Oceanid boss battle, there are eight different types of water monsters summoned(throughout the battle) to kill you. Also, these enemies heal themselves over time. So, dealing with them quickly is your best bet to win.

Now that we have discussed every major aspect of the Oceanid boss battle in Genshin Impact. Here is what you can do to easily win the fight against Oceanid.

Party – Make sure to take at least one pyro user and one electro user.

Apart from the waters monsters, the Oceanid has only three attacks

Use bow users like Fischl to deal with enemies from a long range. Or, use Bennet’s Elemental Skill near the monsters spawn point and go for close range attacks using Razor or any other sword or claymore user.

Cryo users can be used to freeze the water monsters and then close-range attacks way better than long-range(as you can deal with multiple of them at once and since they are frozen they can’t regenerate). So, a team with two Electro and two Cryo users is also a good strategy to go with.

At the end of the battle user forty resins to claim your reward.