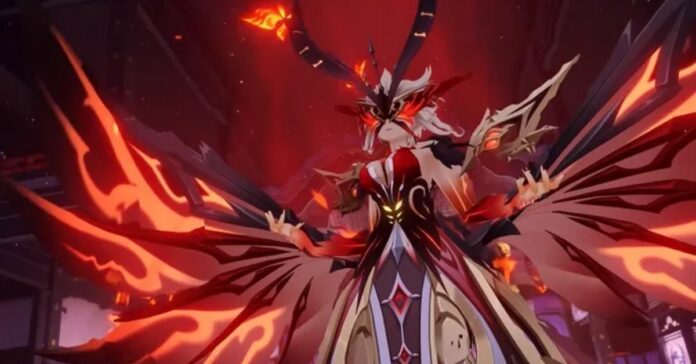 How to Beat La Signora in Genshin Impact

La Signora in Genshin Impact has different elemental forms. Cryo will be her initial element, but during her Crimson Witch of Embers form, she will switch to Pyro element.

RELATED: All Fishing Rods in Genshin Impact and How to Get Them

The battle starts with La Signora being in her Cryo form. She will use lots of ranged attacks, but the biggest threat is a cold status that constantly affects your entire party. You will need to stand near special Pyro devices to avoid the effect of cold. After you deal enough damage, La Signora will try to hide inside the ice. You will have to use Crimson Butterflies that you can find in the boss fight arena. When the ice is broken, La Signora will enter the next form.

In her Pyro form, La Signora tries to attack you with different AoE spells and a burning whip. Now your party will be affected with a Pyro status effect that causes damage. You will need to be near special Cryo devices to resist the flame.

To fight La Signora in Cryo form, you can take Diluc, Yoimiya, or Bennett. For a character against her Pyro form, you can use the Electro Traveler, Ganyu, Tartaglia, Ayaka, Mona, or Xingqiu. The other characters should be picked according to your personal preferences.