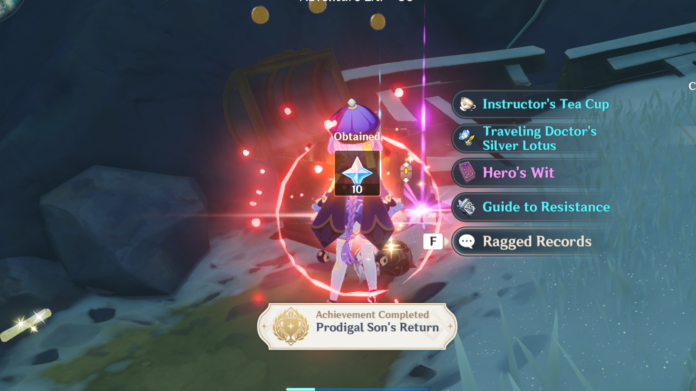 The Prodigal Son’s Return is one of the newly added hidden achievements in Genshin Impact whose official description reads – players have to follow the path of one of the members of a long-lost investigation team to where they embarked on their journey home.

To make it simple and sort, we have simplified the process of unlocking the hidden achievement in terms of steps.

Step 1.) Go to the Travel Waypoint located below Entombed City Outskirts and move straight forward till you reach a big hole filled with water.

Step 2.) There you have to solve the four ice pillar puzzles, where players use Cryo Element abilities to active a pillar.

Location 1.) On the left corner of the big hole.

Location 2.) Right above the leftmost pillar.

Step 2.) After, solving the puzzle activate the mechanism to drain the water.

Step 3.) Below you can find, a cage frozen under Peculiar Ice. Go to the below location to get a scarlet quartz and break the ice.

Go straight north from the mechanism and turn first right.

Step 4.) After breaking the ice, active another mechanism to open the cage doors.

Step 5.) Kill the enemies and interact with the first Ragged Records.

Step 6.) Now use your element view, and follow the traces of elemental energy to reach the next camp. There you will find the second ragged record.

Break the stone wall and open the door via the mechanism on the left.

Step 7.) After a small climb, you reach the camp.

Step 8.) Travel to the teleport waypoint located on a small island. And, go to the below-marked location(star) to find the third ragged record.

Go straight forward to the marked star icon, do not climb the mountain at that location.

Step 9.) The last Ragged Record is near the broken boat.

Open the precious chest to receive some lucrative rewards, and go to achievements menu and claim you free Primogems as an additional reward.