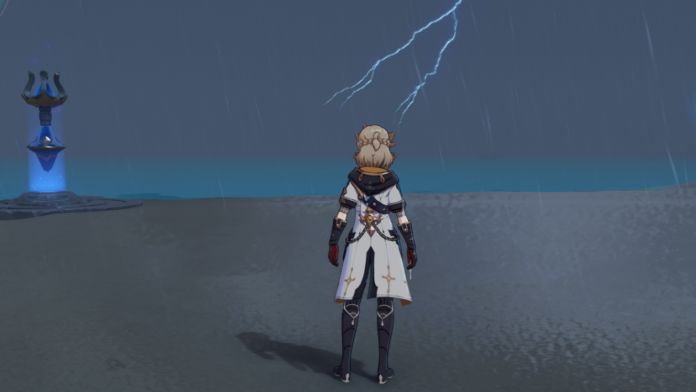 The Wrath of Gods in Genshin Impact is a hidden achievement that players can unlock after getting hit by a lightning strike. It is one of our favorite achievements, that comes with quite a befitting name.

Now, before moving forward with the guide, here is a quick rundown of what we have to do to get Wrath of Gods hidden achievement in Genshin Impact.

First, players have to travel to Yaoguang Shoal and there they have to change their day-time to get thunderstorm weather, then players have to stand near a sky blue surface – indicating where lightning is going to hit next. Once hit, you get the achievement.

With that being said let’s move on with our main guide.

Here are steps required to get Wrath of Gods achievement.

Step 2.) Stand on the right side of the waypoint to get a clear view of the surrounding land.

Related | Where to farm Starsilver in Genshin Impact

Step 4.) Now get back to your posting and spot blue puddles on the ground. It shows where electricity is going to fall next.

Related |How to unlock Goulash Recipe in Genshin Impact

Step 5.) Run to the location and get hit by electricity.

Step 6.) That’s all, you will get Wrath of Gods hidden achievement. At last, go to achievements menu and claim your reward.

Genshin Impact: How to unlock Hidden Achievement “Wrath of Gods”