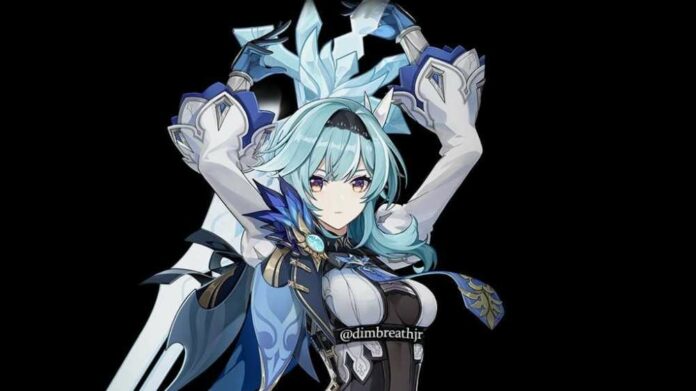 Eula is an upcoming five-star Cryo user in Genshin Impact who is supposed to release with version 1.5 update. She is from Mondstadt and her weapon of choice is a Claymore. In term of elemental abilities, Eula’s elemental skill is called Icetide Vortex and her elemental burst attack is called Glacial Illumination. In this guide, we will share a weapon and artifact best suited for a Eula high DPS build.

Note: This is a pre build guide for Eula. And, the weapon and artifacts mentioned in this guide are subject to change. As we will be trying out different artifacts and weapons on Eula when she releases. So, if we find any new piece of gear that is more effective than the below mentioned ones. Then we will update this article.

What makes Eula one of the best DPS characters in Genshin Impact is her Elemental Skill Icetide Vortex’s hold ability. As after using the ability, Grimheart that Eula posses are converted into Icewhirl Brand that deals with Cryo DMG to nearby opponents, decreasing their PHY RES and CRYO RES.

Even though multiple hits do not stack this effect, it does increase its duration. We recommend you to check out our Eula’s elemental abilities guide to get a better understanding of our main goal with this build.

Decreasing physical and elemental resistance at the same time makes Eula one of the best Raw DPS characters. Granted, her abilities don’t change with the live version of the game.

For Eula, the best artifact would be none other than the Gladiator’s Finale artifact set. Because, it highly increases stats like ATK DMG%, ATK, CRIT Rate% and CRIT DMG.

Here are the different artifacts that come under the Gladiator’s Finale artifact set.

As far as weapon goes, we think Eula is get most out the Wolf’s Gravestone. As with this pre-build guide, we are focusing on Eula raw DPS build.

The Wolf’s Gravestone Claymore offers a base attack of 48(at max level 608), meanwhile, the secondary stat offered by this weapon increase the ATK% by 10.8%(49.6 at max level). With Eula, we are highly relying on her elemental skill, as it will decrease the enemies PHY and CRYO resistance. And, if Eula is paired with two GEO users, her attack will become more effective.

The main reason for choosing Wolf’s Gravestone for this Eula build is because of the weapon’s secondary stat and its ability called Wolfish Tracker. At max refinement, it Increases ATK by 40%. On a hit, attacks against opponents with less than 30% HP increase all party members’ ATK by 80% for 12s. Can only occur once every 30s.

We will update this article when we get our hands on Eula and try out different builds ourselves. But for now, the aforementioned artifact and weapon are the combo that we will try on Eula.