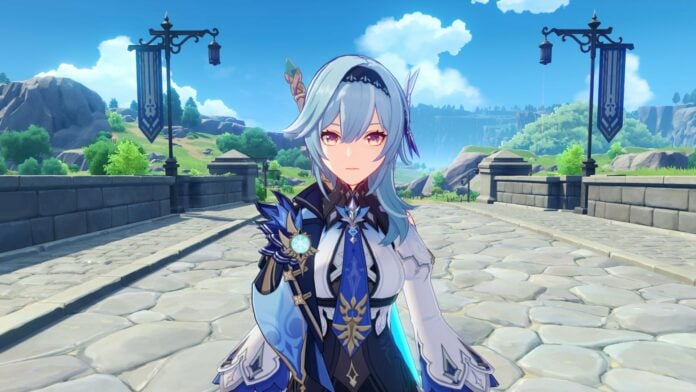 Eula is an upcoming five-star Cryo user and a playable character from Mondstadt whose weapon of choice is a Claymore. She was leaked a few days ago, whilst Genshin Impact 1.5 update beta testing had just started. Genshin Impact 1.5 leaks went complete haywire, and thanks to that, we have a lot of important information on Eula which data-mined by the leakers. In this article, we will talk about, Eula, her elemental abilities, passive talents and constellations.

Eula slasher her Claymore swiftly, dealing Cryo damage. When it hits an opponent, Eula gains a stack of Grimheart that stacks up to two times. These are stack are only gained every 0.3 seconds.

Wielding her sword, Eula slashes forward, dealing AoE Cryo damage to opponents in front of her whilst consuming all the stacks of Grimheart.

Each stack of Grimheart that Eula posses is converted into Icewhirl Brand that deals Cryo DMG to nearby opponents, decreasing their PHY RES and CRYO RES. Multiple hits will not stack this effect, though it will increase its duration.

Here are passive abilities that players can benefit from by having Eula on their team.

When Eula crafts character talent materials, she has a 10% chance to receive double the product.

If two stacks of Grimheart are consumed when holding Icetide Vortex, a Lightfall Sword remnant will be created and explode immediately, dealing 50% of the basic physical damage dealt by a Lightfall Sword created through Glacial Illumination.

When Eula’s normal attacks score critical hits, Icetide Vortex’s cooldown will decrease by 0.3 seconds. This effect can occur every 0.1 seconds.

Here are the different stat and ability bonus Eula gets when players unlock her constellations(C1 to C6).

Eula’s physical damage bonus is increased by 30% after Icetide Vortex’s Grimheart effect occurs. Each stack of Grimheart consumed will extend the duration of this effect by six seconds, up to a maximum of 18 seconds.

The cooldown time of Icetide Vortex’s hold mode is reduced to the same amount of time as the press mode.

Increases the level of Glacial Illumination by three. The maximum upgrade is level 15.

C4 – The Obstinacy of One’s Inferiors

Increases the level of Icetide Vortex by three. The maximum upgrade is level 15.

Lightfall Swords created by Glacial Illumination start with five stacks of energy. Normal attacks, elemental skills, and elemental bursts have a 50% chance to grant the Lightfall Sword an additional stack of energy.