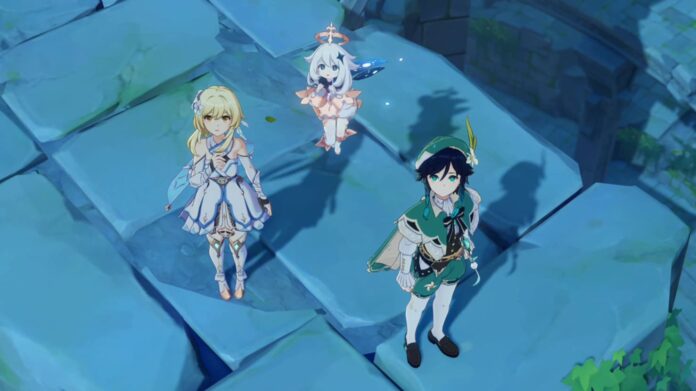 Here is the complete guide for Genshin Impact Dream of Wind and Flowers Quest.

Wait for the Appointed Time and Go to the Mondstadt Plaza

Visit the Mondstadt plaza at the appointed time. For me I visited around 4:24 AM, and it worked fine.

Chose a Flower for Anemo Archon

Jean will give you a list of flowers from which you can select one to offer the Anemo Archon. You can go with any flower as it doesn’t impact the quest. For me, I went with the Cecilia as it is one of Venti’s major ascension materials.

Make a Windblume offering to the Anemo Archon

Offer the flowers on the Anemo Archon altar.

Ask Venti if he liked or not

Once you offer the flowers, you ask Venti if he liked them or not. However, instead of giving an answer right there – Venti asks you to come to Stormterror’s lair.

Travel to the teleport waypoint near Stormterror’s lair bridge. Venti will ask you to solve the issue with disorderly winds.

Solve the issue of the disorderly wind currents in the Ruins

To solve the issue of the disorderly wind currents in the Ruins, players first have to defeat all the nearby enemies to remove the wind shield blocking the puzzle.

Once you defeat the enemy, use an Anemo use to lit up the elemental pillars. In the below-mentioned order.

If you follow the aforementioned steps, you will successfully solve the issue of the disorderly wind currents in the Ruins.

In the end, talk to Venti and he will talk about the past and the true meaning of Windblume. After a cutscene and Venti’s talk, the quest is completed and you get your 60 Primogems and other rewards.