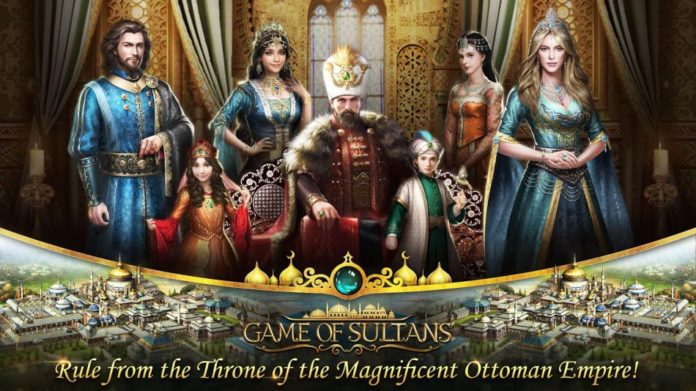 Are you ready for some Game of Sultans cheats and tips? That’s what we have for you and I won’t lie: when I first saw screenshots from Game of Sultans, I though: “Oh, no, not another empire building game!”

We just have too many of those, bringing nothing new to the table. But fortunately, this is completely different with a truly unique approach to the genre. You can’t help but love this game!

In Game of Sultans, you build your empire and much more: you build a harem as well with various beautiful consorts, you get heirs that you develop, you have to deal with pressing problems in the empire… there’s a lot to do in this game and everything is different from what you’ve played, so you will absolutely love this game!

But we’re not here to praise it – although it does deserve a lot of praise! We’re here to share some Game of Sultans cheats and tips in our complete strategy guide, so let’s not waste a second and let’s check out below some tips and tricks to grow your empire, get a huge harem with all the beautiful consorts, have amazing heirs and trustworthy generals!

Focus on leveling up your Character

The main reason why you want your character to level up as fast as possible is that you will get more Levies in the Imperial Parliament, and therefore you will be able to build your army faster – and your number of soldiers are probably the most important element in the game.

In order to level up your character faster, simply choose the Imperial Levies that give you XP points, complete battles in the campaign and use XP boosts in your inventory (you will automatically earn some of these as you play the game).

And don’t forget to actually level up your character by tapping the portrait icon in the upper left corner, as the leveling up process is not automatic!

As I was saying, visiting the Imperial Parliament often is key to building a huge army. As you level up, you can store up more and more Levy taps and eventually you will be able to unlock Auto-Levy, but until then you have to do it manually and it’s not pleasant.

The campaign battles get more and more difficult as you progress through the levels and you will lose hordes of soldiers, which are difficult to replenish.

If you’re just starting to play, only fight the campaign battles when the missions require you to do so – and use the time in between to rebuild your forces.

If you’re already playing for a while now, you probably know the drill: fight as much as possible until your army gets decimated, then wait to replenish troops and be able to fight again.

It doesn’t look like having a lot more troops than your enemy gives you any advantage, so go into battles when you have more and you can end up victorious at the end.

For the final battle, things are a lot easier, as you can send your best Vizier to fight for you – and there you will have to choose the most powerful one. More about Viziers below.

It is a good idea to specialize your Viziers based on their existing skills and talent. The important thing is talent: the higher the numbers here, the higher the growth in their stats when they level up and therefore the greater Kingdom Power that you receive.

Therefore, specializing Viziers that are already skilled in the arts of combat to become better at this is important: do so by investing Military Items and random books skill books.

Remember that these books increase their attributes and therefore increase your Kingdom’s power, so don’t hesitate to invest them.

My recommendation is to focus on 4 Viziers – with a main one like Veli with high combat stats.

If you unlock better ones as you play, you can switch focus – but never have more than 4 Viziers that are your main ones because you will simply not afford to level them up and upgrade them into amazing generals.

If you want to read more details about them, we have a guide to Viziers published here.

Send Viziers to the Academy

The game doesn’t tell you about it, but it exists in your Empire and you can send your Viziers there to get better.

I recommend spending some diamonds to unlock the second slot and have your Viziers trained faster. And make sure that you constantly send them there to train – every 3 hours.

Use the items in your Backpack

Your backpack will be filled with all sorts of items that you collect as rewards from playing the game and you should constantly check them out because there will be some very solid goodies out there.

The most important items, especially early on, will be the ones giving you extra soldiers, as well as boosters for your Character’s XP points and various treasure.

Don’t hold onto these for too long – the sooner you use most of them, the better you will be in the game and the faster you will progress.

You can hold onto some of the items that affect the Heirs (as you will need them as you unlock more) and some for the Viziers as you will also get a lot more from playing the game.

How to get more soldiers?

Getting soldiers seems to be the most difficult thing in the game. The easiest way is to keep collecting them from the Imperial Parliament, but the number per collect are very low, so you would have to be in-game as often as possible in order to keep collecting.

You will receive some nice boosts from completing missions, achievements and other feats in the game – and you should use those soldiers as soon as you have the chance, but otherwise there’s really no other way than to wait it out and be constantly there to collect them from the Parliament.

Building your Harem & getting more Consorts

There are a lot of beautiful potential Consorts in the Empire that you can flirt with and eventually marry, increasing your Harem and chances to expand your domination and Kingdom power.

However, getting more consorts is not easy and there’s just one way to do so: Masquerade. You basically tap the button to Masquerade and, every now and then, you will meet one of the potential consorts in the Empire.

This will rarely happen – and on even rarer occasions you will be able to actually invite the girls on a date and propose… but there’s really no other way to do it. Masquerade as often as possible and you will get the ladies eventually!

Your fortune when masquerading also influences your chances of meeting a lady: try to keep it as high as possible by using fortune shards that you get from performing various tasks or missions in the game.

Finally, when it comes to your Consorts, you can visit them in your Harem and interact with them.

Your main way of interaction is by tapping the “Random visit” which is free and recharges over time, doing exactly what it says: it chooses a random lady from your Harem and either increases their XP or results in a baby.

You can also choose specific Consorts you want to meet by tapping their portrait icon and selecting “Visit”. However, that costs diamonds so it’s not the cheapest way of doing things.

You can also reward your consorts with various items to increase their Charnm (which affects how much XP they get after each visit) or Intimacy (the higher the number, the better your heirs).

We’ve written a detailed guide to consorts here – feel free to check it out if the above info is not enough.

Finally, we have your Heirs in the game, whose main role is that of increasing your Kingdom Power even further.

You find your Heirs in the Harem’s building, where you can interact with them and level them up to adulthood. The rarer the Heir, the more levels they can go up and therefore the better the impact over the power of your empire.

I recommend unlocking the third Heir slot as soon as possible in order to work on three at a time and get a bigger boost from them. You can read more about heirs in Game of Sultans here.

This is all that we have for Game of Sultans right now – but we’re planning to release a few more specific guides for the various in-game mechanics, so don’t hesitate to visit us often if you want even more. Or, of course, if you have your own Game of Sultans tips and tricks to share – you can do so by commenting below.

Game of Sultans Cheats: Tips & Strategy Guide to Build Your Empire… and Harem