As previously revealed, it has been confirmed once again that players will be able to explore the Abyss once they reach a certain point in the expansion.

The four new characters introduced in the Cindered Shadows expansion will eventually also appear in the main campaign, and they can all be recruited. Additionally, they will also be present in part 2 of the campaign, with new designs like the rest of the cast.

As you continue to progress in Cindered Shadows, you can interact with and recruit the four Ashen Wolves in Part 1 of the main game. Once they’ve joined your house, they will be available to take part in battles & classes. They’ll also stick with you into Part 2 of the main game.

The four new classes introduced in the expansion will also become available for all units in the main campaign, but they can only be accessed with certain items. The new classes are a mix of returning classes from previous entries in the series and brand new ones, and they all expand customization possibilities considerably. 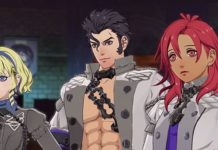