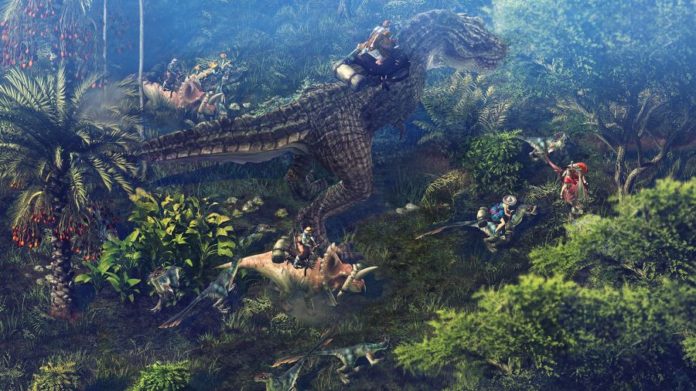 Durango offers some of the most amazing pets / mounts in a MMO out there: dinosaurs! And today we’re going to talk about them, telling you everything you need to know about your future companions in this prehistoric adventure on mobile.

We have already talked in depth about the dinosaur taming process in Durango, so we won’t focus on that too much, but there are a ton of other things that you can do and should look at when dealing with dinosaurs – and we’re going to find everything about them now.

We’re starting with a short gameplay video, if you will, showing you some gameplay alongside some beloved pets in the game:

As I said, we won’t go too much in depth with this as we already have a dedicated guide to this process.

But in order to turn a wild dinosaur into a pet, you will have to capture it and have it spend some time in the Taming Pen. After a while the taming process will be successful (or not) and you will be able to create a bond with the dinosaur and summon it as your pet. 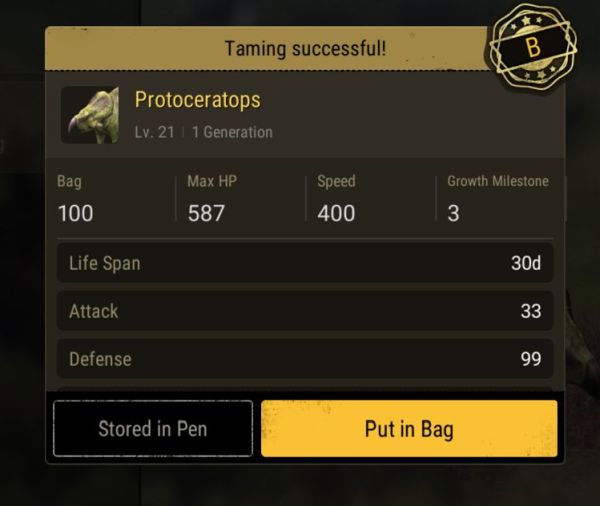 Alternately, you can store it into a Makeshift Pen, where you can also keep it well fed with fruit or meat or whatever type of items it prefers.

There are multiple dinosaurs that you can tame in Durango: Wild Lands and the ones that can be tamed depend on your proficency in the Animal Capture branch of the Survival skill.

Once a dinosaur (or mammal – because there’s not just dinosaurs that you can have as pets in the game!) is tamed, the fun part begins.

In order to be able to use it, you will have to create a bond with the said animal. This allows you to summon it and basically access all the options it offers. In order to summon a dinosaur you have tamed AND have created a bond with, tap the Animals button in the main menu and select it from there. 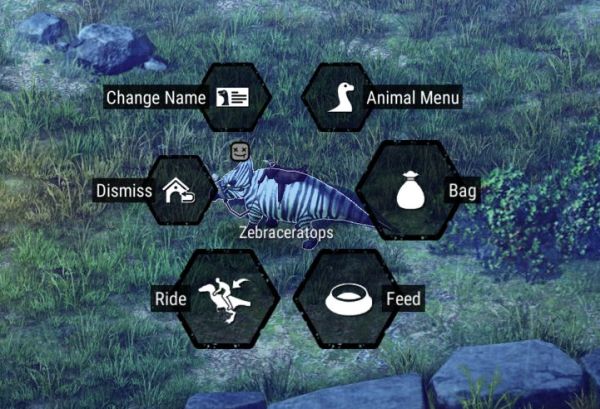 Once the animal is summoned, it will follow you wherever you go. You can also ride the animal, but usually they are slower than your own character. Just check out their speed and see which one is faster. There is absolutely no point in riding a slower dinosaur!

Your pets also have an inventory space available, allowing you to store a ton of items that you wouldn’t be able to otherwise. The best part here is that if you fill a dinosaur’s inventory capacity, you can simply summon another to access its inventory slots without losing the items that the first dinosaur was carrying.

This way, you can really optimize your resource gathering in all places and really stock up on all items you need for crafting back home.

You get access to all the options by simply tapping your animal after summoning it. From the menu, you get to see all the information available, and also rename your pet by tapping the pencil icon at the top side of the screen.

Fighting alongside dinosaurs in Durango

Of course, your pets are more than walking backpacks and fun companions. They will also actively fight enemies that you attack in the game and they will deal more or less damage, depending on their level, type and skills.

They won’t be as good as your own character, but if you are a bit creative, you can really take advantage of their pros and turn them into extremely useful elements of your game.

For example, if you choose to be a Ranged fighter, you can use a pet with high defense ratings and a ton of hit points (such as the starting Zebraceratops or a Protoceratops) to act as a shield.

In battle, in most cases, your own dinosaur will attack in melee, drawing in the attacks of the dinosaur you’re facing, and keeping you safe, at a distance, dealing heavy damage.

Even for melee fighters, dinosaurs can prove extremely useful as they still deal damage and sometimes take some of the hits coming your way, therefore preventing you from losing all your hit points.

Leveling up your dinosaurs

When a pet is following your character, it will gain experience whenever your player earns some. Pets level up as well and they increase their base stats (Attack, Defense and Accuracy) as they go up the levels. 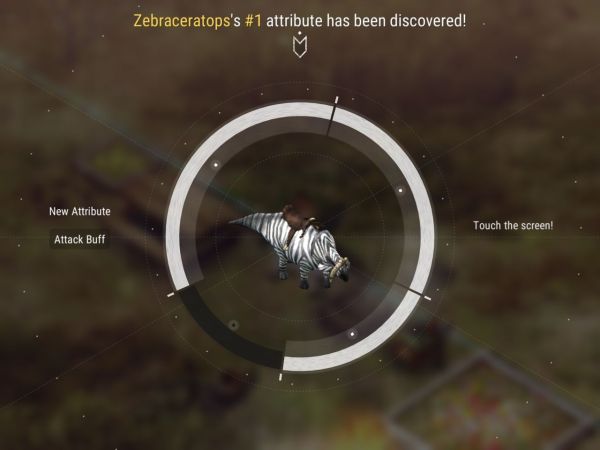 They also have some milestones which, once hit, give you a chance to unlock a special attribute. These milestones are level 20, 40 and 60, and the attributes you can find are Attack Buff (for added damage in combat), Speed Buff (faster pet) and Bag Capacity Buff (they can carry more).

It’s all random, but if you get a buff you’re not happy with, you can spend some money to reroll. I recommend doing this and at least get an attribute buff (since you might end up with nothing on a roll).

The Attack buff is most useful if you plan to have your dinosaur help you more in battle, while the speed buff can be really useful if you want to move around the map a lot faster. I personally prefer the latter. 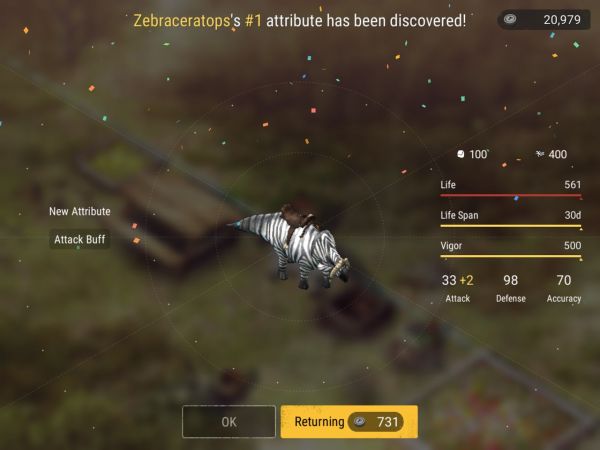 Apart from that, you can unlock your pet’s Special Behavior, which is randomly rewarded out of 9 possible options: from increased movement speed, to lower fatigue, to increased attack… there’s a bit of everything for everybody there. But you will only unlock this when your pet reaches the maximum level, so there’s a lot of work involved.

Your pets have to be fed in order to have more energy (it’s called Vigor in their case). In order to feed a dinosaur in the game, you first need to have in your inventory a bunch of items that are part of their diet: if you have an herbivorous pet, you need fruits or leaves or anything like that, while carnivorous pets will only eat meat and similar animal products.

I wasn’t really able to see what a well fed dinosaur does extra compared to one that is starving, though. I still do my best to keep my dinosaurs well fed at all times as there might be some sort of boost coming from that. 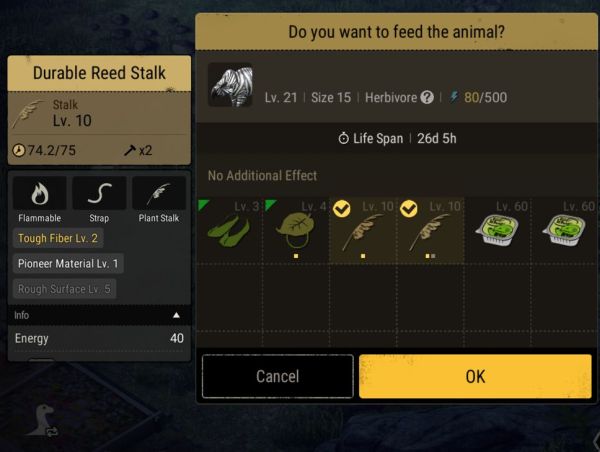 Also, all pets have a limited life span: usually 30 days. Afterwards, they start to age and this makes them lose their stats. I am not sure if dinosaurs and pets can die in Durango Wild Lands, but I do know that there are some Anti-Aging remedies that you can use on them to reverse aging.

How many dinosaurs / pets can you have in Durango? 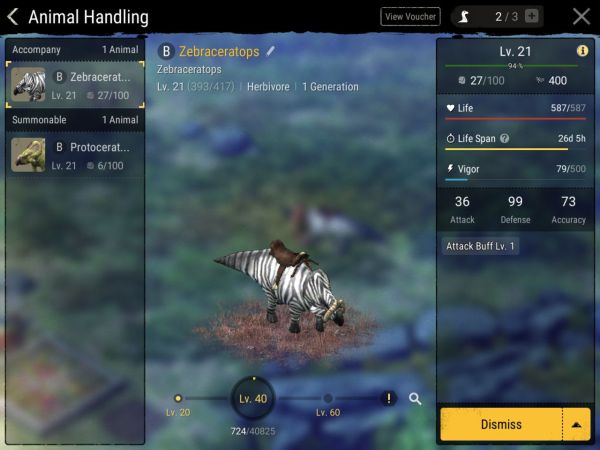 You start with just a few slots for pets (2 or 3, can’t remember exactly the starting number), and these grow as you level up. You can increase the number of pets you can bond with by investing your skill points into Animal Handling. You can find this by going to the Animal Taming branch in your Survival Skill.

But although you can hold a ton of dinosaurs, I would still recommend that you focus on a main one and level it up to the max in order to unlock all of its benefits.

It’s difficult to level up and max out multiple dinosaurs, because they require a ton of experience to go up the levels, so only have a main one that you use in combat or for moving around the island faster, and keep all the others you can as portable bags to carry important items around. At least that’s my approach and it seems to be working great so far.

And this would be our guide to pets / dinosaurs in Durango: Wild Lands. Do you have additional questions or tips for fellow players? Don’t hesitate to let us all know by commenting below.

And if you want to check out more helpful articles for Durango, check out our hub here where you’ll find them all.