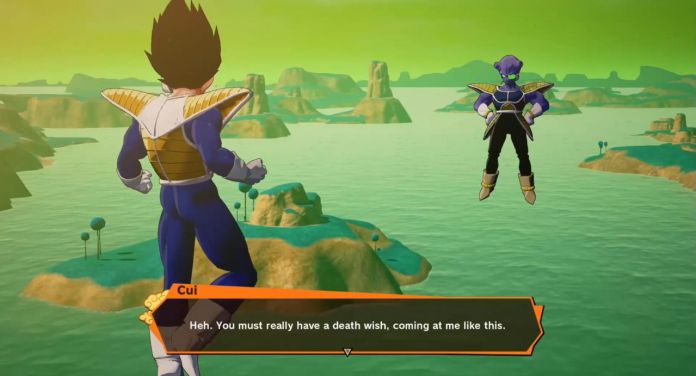 Following his defeat by Goku at the end of the Saiyan Saga in Dragon Ball Z: Kakarot, Vegeta discovers that he is not as powerful as he thought he was. His arrogance prevents him from becoming friends with Goku, but what he learned from the Saiyan that grew up on Earth will allow him to become much stronger, and stand a chance against many of Frieza’s henchmen, like Cui, turning him into an unwilling ally.

Here’s everything you need to know to take Cui down in Dragon Ball Z: Kakarot.

How to Defeat Cui in Dragon Ball Z: Kakarot

Cui is the very first boss you will have to fight in the Frieza Saga and, like the Piccolo and Krillin boss fights at the start of the game, is more of a tutorial, as this fight is meant to teach you how to use Vegeta.

Cui has a very limited moveset that makes it easy for players to get used to Vegeta’s own moveset without feeling overwhelmed. The boss can unleash two different attacks: the long-range Assault Blaster, where he shoots 10 energy projectiles that can be easily dodged, and Meteor Crusher, a rushing close-range attack from above that can also be dodged, although with slightly stricter timing. After dodging any of the two attacks, Cui will be open to your own, so use Vegeta’s Galick Gun to deal damage from a distance or close the distance and unleash melee combos.

Repeat the strategy above until Cui is defeated. Don’t be lulled into a sense of security by this fight, however, as the battles ahead will be considerably more difficult.