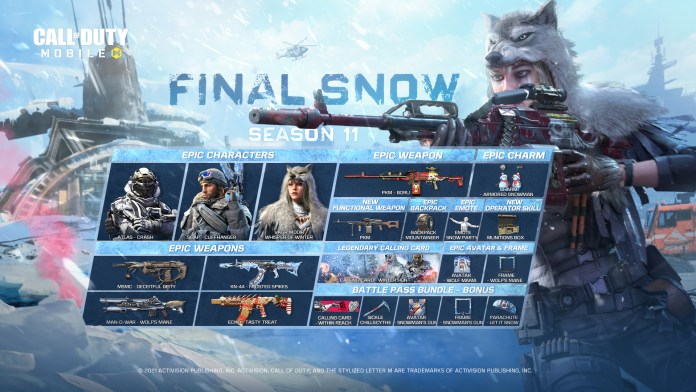 COD Mobile Season 11 called Last Snow is just around the corner and there’s a lot to be excited about the new Season. A new winter map covered with snow is coming to the game with Season 11, along with new weapons, items, Operators and more. There will also be a brand new Battle Pass with exciting rewards and skins.

COD Mobile leakers have dug up a ton of information about the new Season fueling the hype further. This article will share all the leaks surrounding COD Mobile Season 11.

Any new Season in COD Mobile cannot be complete without the Battle Pass. According to leaks, the Battle Pass for Season 11 will bring these three Epic characters to the game:

With the new Season, the developers are adding a new feature called Lucky Draws. Basically, these lucky draws are a way to obtain cosmetics and other in-game items by spending some CP. Leaks show many new holiday-inspired weapons and character skins as well as some premium cosmetics.

Leakers have also dug up a unique cosmetic that players might get from the COD Mobile Season 11 Battle Pass.

According to prominent leaker Call of Duty: Mobile News, there’s a reward for Undead Siege from Zombies for players in the upcoming Battle Pass. Apart from this, the Season 11 Battle Pass will also contain some new weapon skins.

COD Mobile Season 11 Leaks: Everything We Know So Far