Home Guides COD Mobile: How to Earn the Kingslayer Medal

Call of Duty: Mobile is one of the most popular multiplayer titles at the moment. The game features a variety of ways to keep track of player’s achievements. One such method is Medals. From a total of 86 medals, players can earn 42 medals from the Multiplayer mode.

The Kingslayer medal is one of the Multiplayer medals and is in great demand since the game developers added the challenge called “Earn Kingslayer Medal in MP matches five times.”

How to earn Kingslayer Medal in COD Mobile

You might be facing difficulties while completing the fifth task of the Gold or Nothing challenge, i.e. to Earn Kingslayer Medal in MP matches five times.

The Kingslayer medal is given when a player kills the enemy who had the highest score while playing a Multiplayer match. Players can also kill the opponent’s top fragger multiple times to bag more than one Kingslayer medals.

Once you dive in a COD Mobile MP match, open the scoreboard and look at the enemy’s name, who has the highest kills. As soon as you defeat him, the medal will be displayed under the match score.

Repeat the process five times in order to complete the fifth stage of the Gold or Nothing challenge.

You can also follow the below-mentioned guide, which will help you out to earn the medal quickly.

Related: COD Mobile: How to get Berserker Medal

COD Mobile: What is Festive Grenade and How to Use it? 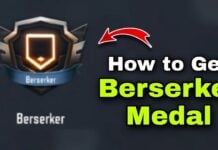 COD Mobile: How to get Berserker Medal