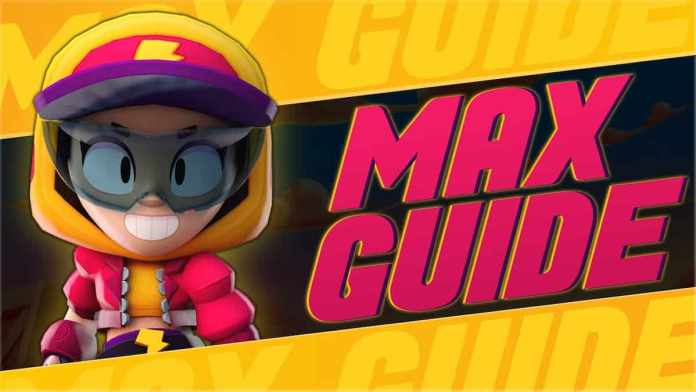 If you are wondering how to unlock Max in Brawl Stars or how to play this brawler, then you’ve come to the right place! Here in this article, we will discuss that and much more in detail.

Max – Faster than a Cheetah!

Max is a Mythic Brawler with a high movement speed, moderate health, and moderate damage output. Max launches four long-range projectiles in a slight spread as part of her attack. Her Super increases her and nearby allies’ movement speed for a brief period of time. Her first Gadget, Phase Shifter, allows her to dash in the direction she is facing while also providing an immunity shield.

With her initial health, her second Gadget, Sneaky Sneakers, create a teleporting location icon that she teleports back to after 3 seconds. Super Charged, her first Star Power, charges her Super while she is moving. Run n’ Gun, her second Star Power, boosts her reload speed while she’s on the move.

How to Unlock Max in Brawl Stars

Max is a speedy brawler, and everyone loves speed. Players should try opening various Chests, also known as Brawler Boxes, to get this brawler. You have a good chance of getting this brawer from high-level Brawler boxes! So, what do you have to lose? However, before purchasing a Box, make sure to check the Shop to see if this brawler is currently on sale.

Brawl Boxes are also helpful in unlocking all of the Brawlers in Brawl Stars. Brawlers are obtained randomly from Brawl Boxes, and the higher the tier of the Brawler, the lower the chances.

However, where and how do you obtain the brawler boxes? Brawl Boxes can be purchased from the main menu. PowerPoints, Gems, and other items can also be found in Brawl Boxes.

Tick, Jessie, Bull, and Colt are just a few of the unique brawlers that can be unlocked or obtained for free by simply collecting more Trophies in the game. Go to your Trophy Road page in the game to see which Brawlers you can unlock and how many trophies you’ll need.

How to Play Max in Brawl Stars

Max’s Sneaky Sneakers Gadget is useful in Showdown when you need to defeat a vulnerable enemy like a thrower but are worried about being third-partyed. You can then try to defeat the enemy without your Sneaky Sneakers Gadget. After fighting the enemy, you’ll most likely be low on health and a target for other enemies, but you’ll teleport back to your Gadget’s location and regain lost health.

To avoid being ambushed where you’ll teleport, make sure to use this Gadget only when you’re away from enemies or surrounded by obstacles. Also, don’t leave your Super too far away from the Gadget location because you never know who might be trying to ambush you when you return, and you should save your Super for such situations.

This means you should save your super before going into battle with enemy brawlers. It’s probably a good time to use your super to speed burst your entire team in there when your super is fully charged, and your teammates’ supers are slowly charging as well. Clear out the enemy team with your supers, and then take complete control of the map.

In a 1v1 situation against a weaker brawler, if you have your super, you can quickly get into an excellent position to finish them off or kill them from a hundred to zero. Your super is also a handy tool for getting to where you need to be on the map and helping your teammates get into better positions.

The more you move around the map and go in and out of bushes, the better your relationship with Max will become. The reason for this is that she is one of the game’s fastest brawlers, allowing her to move around the terrain and get into perfect positions faster than almost any other brawler, particularly with her super.

So make sure you’re using your speed to your advantage at all times because she’s one of those brawlers who is dangerous when she’s on the move. You don’t want to ever stand still with Max because it won’t help you in any way. After all, she’s a brawler who requires speed to be effective.

The auto-aim is a lifesaver for some brawlers, but spamming this feature with all brawlers is a big no-no!! If you know that using Auto-aim will ensure that you kill your enemies, you should use it.

Max’s shots are rapid in the game, and it’s straightforward to hit those shots with auto-aim when the brawler comes in and engages. However, using auto-aim will waste your attacks if an enemy is too far away or always hides in the bushes.

If you’re at a long-range, it’s probably best to drag your shots and aim them, but if you’re very close to an enemy brawler, auto-aim will suffice. Because the shots come out so quickly, and there are so many of them, as long as you’re moving with the enemy brawler, the majority of your shots will connect. She has severe burst damage and can quickly melt any brawler.

Max fires four staggered, long-ranged projectiles with a slight spread from her blaster in rapid succession. She is one of the few characters with four ammo slots, and her ammo reloads quickly.

Max drinks some energy drink from a bottle and creates a one-second area-of-effect around her that increases the movement speed of her and her teammates within the area-of-effect by 300 points for four seconds.

If you love brawlers who are speedy and not like 8-Bit (slowish), then you’ll surely love Max. However, handling him will surely take your descent amount of time. Most of the players play her aggressively (while keeping distance).

If you are a beginner, you should consider using the sneak-peak strategy, i.e., constantly ambushing and attacking. Above all, the showdown is one of the best game modes (where she’s a cheetah) LOL!

That’s the basics in a nutshell. Tell us what you think of this speedster brawler, and if you haven’t played it, what are you waiting for? He’s decent but too fast to handle for newbies in the game. Go ahead and give it a try, and if you are finding trouble, don’t hesitate to fall back to this Brawl Stars Stu Guide for tips!