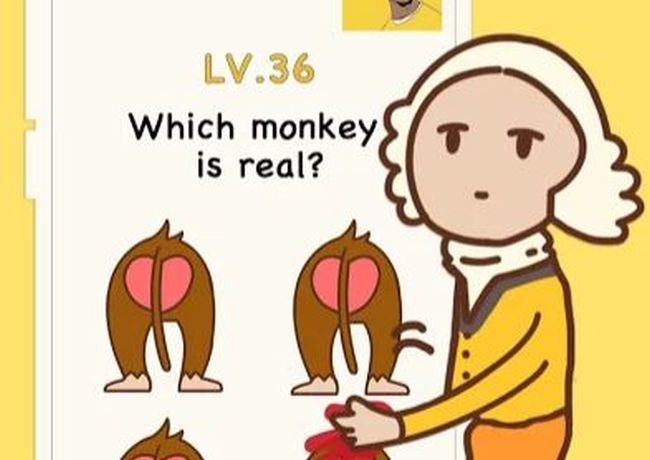 We are back with even more answers to help you pass the stages of the game! Today we will cover 35 more levels of the game, so we’ll give you the Brain Boom answers for levels 141 to level 175!

But let’s not waste another second and dive right into the Brain Boom answers for levels 141 – 175 and help you solve the puzzles!

Q: Do not look at me.
A: Place your phone with the screen down for a few seconds.

Q: Who’s the programmer?
A: Move the fourth guy’s hair away and tap on him.

Q: What will you do if you bump into someone you do not want to see?
A: Move the person away from the screen. (drag him outside of the screen)

Q: Share this to two kids.
A: Slice the doughnut by dragging your finger across it and then place half on the second plate.

Q: The kid’s football went missing.
A: Move the image with the kid and the field to the left and you will reveal his ball on the right.

Q: Unlock.
A: Move the unlock screen towards the key, not the key button towards the right as you would normally do.

Q: Tell whether he loves me or not by tearing down the petals.
A: Tear down all of the petals from the flower, then the word “petals” from the text.

Q: Drink water.
A: Press the button when the straw is aligned with the man’s mouth.

Q: Make a Japanese flag.
A: Take the background from the basketball ball and place it on top of the white flag.

Q: Your girlfriend wants to come to your place, but you still have something left from your ex. You only have enough time to cover one thing. What will you cover?
A: Cover the girl’s eyes by placing your finger there.

Q: What sport does tyrannosaurus hate the most?
A: D. Weight lifting.

Q: Prepare the healthy meal.
A: Shake the hamburger until the contents separate.

Q: Which is the most beautiful one?
A: Move the boy in front of every girl, and when his face turns red select the girl (third one).

Q: Where is the unicorn?
A: Move the cone from the ground (from the dropped ice cream) on the head of the third horse to make a unicorn then tap on it.

Q: What would you do if the pen won’t write?
A: Shake your device.

Q: How will the ball fall if you cut the rope when it reaches the highest point?
A: C. Fall down.

Q: Shoot at the basket.
A: Tap the “Shoot” button when the pointer is aligned with the green color.

Q: Make the progress bar full.
A: Drag the two extra bars form behind the others and place them in the empty space.

Q: Open the airplane cabin door.
A: Pull the door towards the left side.

Q: Wipe out the earthworms.
A: Tap and hold onto the worm’s body and when the “Delete” button appears, press it.

Q: Another one.
A: Scratch in the grey area until you reveal text “Another one”.

Q: If only I was the first.
A: Move each individual number to create from “01” from the two rows.

Q: Which one is the drag queen?
A: Flip your phone up side down to reveal which one it is and tap on it.

Q: Where is the prince?
A: Drag the lips onto the frog and you will reveal the prince.

Q: Shoot at the basket.
A: Press the button “Shoot” when the cursor is in front of the green meter because there is a small delay.

Q: There’s an apple eating contest between the wolf and the sheep. Who’s better at it?
A: Drag the sheep over the wolf so the wolf will eat it. Then press the button that says that the wolf wins.

Q: Something is wrong with the plane! What should you do?
A: Buckle in the seat-belt.

Q: It’s raining again. What should you do?
A: Move the boy above the clouds where it doesn’t rain.

Q: Which color is lighter?
A: Move all the blocks away to see which of them is lighter (as in less heavy). It’s the purple one.

These are all of our Brain Boom answers for levels 141 to level 175! Don’t go too far because we will update you as soon as new answers get released! 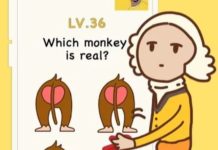