Bloodstained Ritual Of The Night is soon going to get a major update on Nintendo Switch, introducing bug fixes and more.

The new update has yet to receive a release date, but it’s been submitted for approval, so it shouldn’t take too long to release. You can find the full details of the update below.

Performance Updates
The teams continue to work on input delay, stability and optimization. We’re not ready to release these improvements just yet, but we’ll be sharing more information in the coming weeks.

Bloodstained Ritual Of The Night is now available on Nintendo Switch. 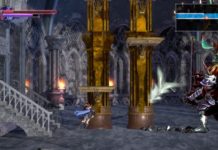