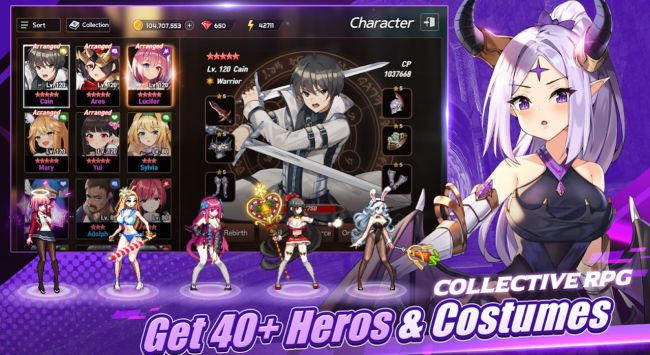 Do you want to know who are the best Sword Master Story characters? Then you came to the right place! In today’s article we will dive into a complete tier list and share with you our picks for the strongest heroes you can add to your team.

If you’re still trying to figure out the game, you should take a look at our Sword Master Story guide, where we explain everything that you need to know in order to get you started.

So, without further ado, here is our complete Sword Master Story tier list:

When you use your 5-star Summoning Tickets or do the 11-summon gacha, you should aim to get one of the following heroes. If you don’t get them first try, don’t despair. You can still progress using 4-star heroes, because the game is very forgiving in that aspect.

– Odin: She is one of the first heroes I got, and she’s a great addition to any team. Odin has a chance to cast lightning and damage the enemy, which is great if you want to burst them down quickly.

– Lilith: She is great for reducing the enemy’s defenses, thus making them more vulnerable to all incoming attacks.

– Joan of Arc: She can work great for boosting the team’s defense, as well as cast crowd control on the enemies and burst them down.

– Athena: You might recognize her from the main interface of the game – she is a great DPS unit which can also boost allies’ attack and stun the enemies.

– Lucifer: Lucifer is ideal against bosses, because she deals extra damage to them. She can also inflict stun on enemy units.

– Mary: Mary is an adorable archer who can boost the attack speed and damage, making her a great addition to any team.

– Artemis: She can summon ice arrows which pierce the enemy, dealing a lot of damage. She will also boost the team’s Crit Rate.

– Gaia: She can burst down enemies with rapid attacks, and increase her own Crit Rate.

– Ares: Ares is simply amazing! She can increase the attack speed and attack dmg, and block incoming enemy attacks. (no wonder – after all, she takes after the Greek god of war)

– Vivian: She can boost the defense of the team, and increase her own attack damage.

– Yui: Yui is simply the greatest healer in the game. If you got her, you won’t need another one.

These heroes are good, you could use them until you unlock stronger ones. They will have the ability to carry you through the tougher dungeons, so they are almost as good as the S tier ones.

These heroes are pretty average, but if you work on upgrading their skills and level early on, they will do just fine until you get stronger ones to replace them. I suggest trying out different compositions, because you might be surprised to learn that some of these heroes, even though they are B-tier, will do very well.

These heroes can work well at start, but in the end game they will be pretty weak, even if you upgrade them constantly. If you are using these C-tier heroes, I suggest to invest just enough to carry you through the most necessary stages, or until you can summon better ones. Don’t go ham on upgrading them and wasting resources!

This would sum up our Sword Master Story tier list. Keep in mind that every team should have a tank (a Warrior), a DPS and a Support. I definitely recommend keeping a support unit in, because it’s going to help the team more than you think.

However, if you want to burst the enemies down (and they are not that strong, so you won’t get 1-shot) you could get away with using only DPS and Warrior units. It’s up to you!

If you are not sure what supports to choose (because let’s be honest – there are not that many), you could go for Rachael (for durability boost), or Johan (to boost your offenses) until you can get Yui. As for the DPS units, I believe it’s pretty self-explanatory.

Who are your favorite characters and why? Let us know down in the comments below! Also, if you are looking for coupon codes to get free Rubies, you can find them all here. If you have any questions, feel free to ask us anything – we’ll do our best to get an answer for you ASAP!