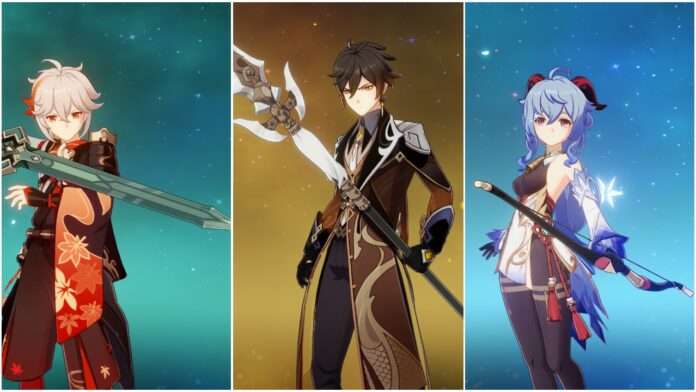 Starting the list with amazing 5-star weapons for support characters:

Freedom-Sworn is one of the best weapons for support characters in Genshin Impact. This weapon is tailor-made for Kaedahara Kazuha but can work with other support characters like Bennett, Xingqiu, Jean, etc. When the wielder triggers an elemental reaction, the entire party will receive a boost to their ATK and Normal, Charged and Plunging Attack DMG.

3. Elegy for the End

Elegy for the End is similar to Freedom-Sworn as they are from the same weapon series. Players can use Elegy for the End on support bow characters to boost Elemental Mastery and ATK of the entire team. This bow is great in Vaporize and Melt reaction-based teams.

All Favonius series have a passive that lets them generate energy orbs on a critical hit. On the other hand, Sacrificial weapons reset the cooldown on elemental skills, which is extremely useful on characters with long skill cooldowns such as Xingqiu, Qiqi, Electro Traveler, etc.

3-star weapons are mostly ignored after players reach higher adventure ranks in Genshin Impact. However, there are a few 3-star weapons useful even at endgame content.

Thrilling Tales of Dragon Slayers is an amazing weapon for catalyst support characters in Genshin Impact. Just by switching to a character, players can get a 48% ATK boost at Refinement Rank 5.

Black Tassel is a great Free-to-play weapon option for shield support Zhongli and Thoma in Genshin Impact. Both of these characters can create strong and durable shields using Black Tassel.