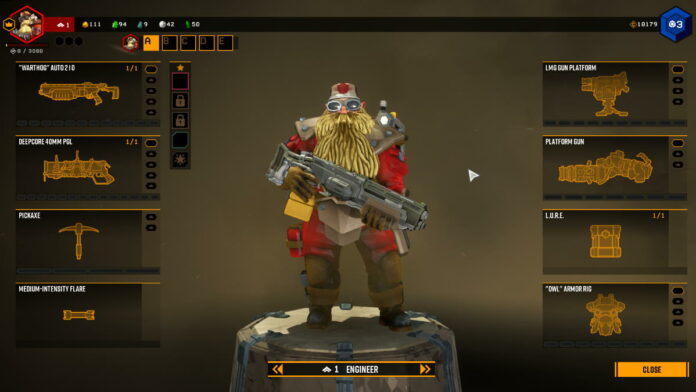 The Engineer class in Deep Rock Galactic is the one with all the fancy tools. They come equipped with a portable sentry gun, and a gun that can create makeshift platforms! Engineers can hold their own in a fight as well, as they’re packing mean shotguns and powerful explosives. With several weapon options to choose from, which ones are the best? Today, we’ll be looking at the best Engineer build in Deep Rock Galactic!

In Deep Rock Galactic, each player has a primary weapon, secondary weapon, and grenade. You get at least three choices in each category, but you can only choose to bring one with you on a mission. We’ll be going over the Engineer’s options and discuss which options are the best.

The “Warthog” Auto 210 is the starting primary weapon for the Engineer class in Deep Rock Galactic. Many Engineers swear by this weapon, namely for its stunning, armor-breaking, and Sentry upgrading properties.

The Warthog is a great choice if you like to get up close and personal with the bugs. It doesn’t do too well at long range, so make sure you stay close to your targets. With the Stunner overclock, the Warthog has an increased chance to stun enemies with shots, making it even more powerful up close.

With the Tungsten Coated Buckshot modification, the Warthog becomes a beast at destroying the armored enemies. Couple this with the Turret Whip modification that lets you fire concentrated bursts from your sentry, and you have a lot of options when it comes to dealing with swarms and big enemies.

If close encounters aren’t your thing, the LOK-1 Smart Rifle is an excellent choice for dispatching bugs from afar. You can fire this thing normally at mid-to-long ranges, or you can hold it down to lock onto multiple enemies and fire upon all of them in rapid succession.

With a variety of mods that affect how the lock-on system works on the LOK-1, it can be upgraded into a terrifying beast of a weapon that mows down swarms with relative ease.

Both of these weapons are great choices, but the one weapon that is kind of universally agreed upon to be just “OK” compared to the other two is the “Stubby” Voltaic SMG.

The Stubby isn’t bad by any means, but it lacks raw power compared to the other two weapons. The electrified rounds are nice, and with the right mods and overclocks such as EM Refire Booster, you can make the electric rounds really do some work.

At the end of the day, if you’re unsure of what primary to pick, we recommend either the Warthog or the LOK-1.

The Deepcore 40mm PGL, the starting secondary weapon for the Engineer, is often considered to be the best secondary due to its sheer destructive power. It’s got tons of modifications that increase its blast radius and damage, making it the ultimate weapon for swarms.

Another great secondary weapon to use is the Breach Cutter. The Breach Cutter fires out horizontal energy beams that can pierce through enemies and walls, giving it a lot of utility not found on the other weapons.

Though it’s not quite as strong as the Deepcore, the Breach Cutter makes up for it with versatility. The piercing energy beams work amazingly well for crowds, and with mods and overclocks like Disruptive Frequency Tuning and Return to Sender, you can keep swarms and big enemies on lockdown with damage and stuns.

That brings us to the Shard Diffractor, the newest secondary weapon for the Engineer and unfortunately the one that sees the least amount of use. The Shard Diffractor fires a high-powered laser that has infinite range, eventually melting targets to nothing.

While it sounds good on paper, the Shard Diffractor is extremely clunky to use and doesn’t deal great damage to boot. Upon firing the beam, you’re committed to the entire laser burst, and you slow down to a crawl while it’s firing, which can easily get you overrun in swarms.

To recap, the Deepcore with the strongest overclocks is usually the way to go for most situations. If you want a little more crowd control and boss damage utility, the Breach Cutter is a great choice as well.

Unlike the other classes where there is generally an option that is better than the others, the Engineer’s grenades are all great options. The grenade you want to choose depends on the situations you want to be most ready for.

The L.U.R.E. creates a dancing hologram that attracts nearby enemies. The L.U.R.E. is great for emergencies where you need to quickly create some breathing room. At the end of the L.U.R.E.’s duration, it explodes with an electrical blast, causing a small amount of damage and inflicting electrocution.

The Plasma Burster is actually four grenades in one. Upon contact with any surface, the Plasma Burster will split into four smaller bursts, traveling in the direction the grenade was originally thrown in. This is a good, all-around grenade that can be help clear out swarms easily or do some decent damage to a big enemy.

The Proximity Mine is a great tool for when you need to defend a single point often. As such, these are more suited for specific missions like Salvage or Escort. Place them in choke points and watch the bugs walk right into them, but be careful of friendly fire—your teammates can’t activate them, but they will be hurt by nearby blasts.

At the end of the day, all three of the Engineer’s grenades are great choices, and none of them will ever seem like they’re completely useless. Some are better suited for specific situations, but they’re all great for universal encounters.

That concludes our guide on the best Engineer build in Deep Rock Galactic. To recap, there really isn’t a best build per se since the Engineer’s options are all pretty great, so choose what fits your mission and play style the best.

What do you think about the Engineer’s weapons? Do you agree with our picks? Let us know your thoughts in the comments below!