Black Desert Online is one of the best MMORPGs in terms of character creation, gameplay, classes to choose from, and graphical fidelity. The game looks phenomenal on all platforms, whether we talk about the remastered PC and Console version or the Mobile release.

Combat is Black Desert Mobile is just like any other Korean MMOs. It is fast-paced, diverse, and differs as per the character you choose to play with. In total there are twelve playable classes in Black Desert Mobile. Today we are going to talk about all the classes, their abilities, the weapon of choice, awakening, and ascension, etc.

Disclaimer: Generalizing some characters as the best characters in the entire game, especially in an MMORPG not appropriate as we all have different playstyle and levels of engagement and understandability with the game.

So, to make it a guide suitable for new players we are going to talk about all the available characters in Black Desert Mobile, along with their awakening and ascension. Choose the character that deems a suitable fit for you.

The warrior in Black Desert Mobile is a tank class as well as an all-rounded fighter that is good at both offense and defense. When we talk about the choice of weapon, the warrior is equipped with a shield and a longsword.

Also Read: How to play Payload Mode in PUBG Mobile

In Black Desert Mobile, Warriors are best suited for players who don’t care about the size of the mob, players who want to play the game straight forward, players who don’t want to waste their time on understanding each and every passive, equipment, and other stats and arsenal.

The Warriors shield is forgone, instead, players now utilize a Greatsword to Annihilate their enemies.

Equipped with Longsword and Shield, the Gladiator unleased a more refined flurry of heavy attacks.

The Ranger in Black Desert Mobile is a Ranged combat type character that focuses more on single precise shots. Rangers are highly agile, they can easily traverse the battlefield and if you want to take the fight up close and personal then the Ranger is equipped with a dagger, and she can use kicks to maintain the distance.

The Windwalker takes the agility part of the ranger to next level. Now, equipped with a Kamasylven Sword(a rapier type weapon)/ Feather, the windwalker releases a flurry of precise attacks with high DPS.

The Huntress is a sniper who deals with long range precise attacks.

The Witch in Black Desert Mobile is a ranged type character that deals with elemental damage at both long and short range. If you want to build a character with high AOE damage then, witch is one of the best character for you.

The Invoker is nothing but a class similar to Summoner. Equipped with Aad Sphere/ Magic Tome, an Invoker can summon lightning and earth type guardians to deal heavy damage.

The Archmage is the true AOE damage dealer. If you want to play as a witch and want to deal high AOE damage then ascend the witch to the archmage, as she can annihilate group of mobs at once with her elemental attacks.

The Giant in Black Desert Mobile is a melee type character suitable for players who don’t believe in the offense. It plays a similar role as the Warrior, but, he is not on the same level when it comes to defense.

When it comes down to the weapon of choice, the Giant is equipped with Dual Axes/ Ornamental Knot. And, the giant class is good for both single and group fights.

As a Destroyer, the giant is equipped with the heavy dwarven armor, and weapon- Iron Buster/Cannonball. The Destroyer deals heavy damage, and they are strong at defense.

The Valkyrie in Black Desert Mobile is a melee type character equipped with a longsword and a shield. If you ever wanted to play as a warrior but also, wanted to be good at support, then Valkyrie is the best character for you.

The Lancer is equipped with a holy lance called Lancia, along with an armband. The lancers attack reach is high and she offers improved support and offensive capabilities.

The Sorceress in Black Desert Mobile is a Melee/Ranged type character that uses dark magic to win battles. A sorceress one of the best character for new players. The shear ability to deal devastating damage to both close range and long range enemies is one of the many charms of using this class.

Equipped with a Scythe and Soul Orb, you will feel like a Shinigami. Dealing high crit. melee damage. Dealing with enemies at long range and close combat with ease and an embodiment of dark powers.

The Dark Knight in Black Desert Mobile is a melee type character good at both magic and swordplay. We recommend dark knight to players who are more into flashy attacks as well as who want to make a character who deals with high AOE damage and DPS.

The Dark Knight is equipped with Kriegsmesser and Ornamental Knot.

The Phantasma excels at both melee and ranged combat. Use phantom blades and other dark powers along with the over powered melee weapon Vediant/ Magic Blade to slay your enemies.

The Striker in Black Desert Mobile is a pure melee type character equipped with a Gauntlet/Vambrace. It is nothing but a brawler class for people who like martial arts and who are more into hand combat.

As the name suggests, the Hashashin in Black Desert Mobile is an assassin type character good at dealing high damage and fooling its enemies to make an escape.

The Tamer in Black Desert Mobile is a melee type character with high agility and offers some of the best movements in the entire game. The divine beast Heilang accompanies the Tamer to all battles, this makes the tamer good for players who want an attack summon from the get go.

Equipped with Celestial Bo Staff and Sachet, The Spiritwalker awakens true powers of Heilang, and offers a more agile and refined melee combat.

Heilang is a now a character in himself, Lupa becomes a good DPS character.

The Maehwa is a newly introduced class in Black Desert Mobile. Even though she comes under the melee category, Maehwa is a good ranged character.

Why you should chose Maehwa as a starting character?

Lady with Katana, Good at both long and short-range, refined skillset, a flurry of unstoppable attacks.

Equipped with Kerispear and a Banner, Primrose is one of the best DPS character in Black Desert Mobile.

Equipped with the Crescent blade and banner, the Warlord becomes a force that deals massive AOE damage.

Black Desert Mobile is a free to play MMORPG currently available on Android and iOS devices. 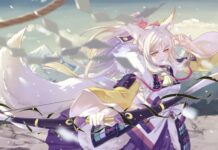