Support is one of the four unit classes in Alchemy Stars, and they specialize in healing the squad’s wounds and empowering them with buffs. Support units sometimes also have the ability to weaken their enemies, setting up the rest of the squad for an easy combo.

Raphael is a powerful support unit with the ability to provide her squad with strong heals. Her active skill recovers HP equal to 200% of Raphael’s current attack. In addition to her active heal, her equipment skill automatically heals the team whenever a blue tile is generated on the field. Her active can sometimes generate blue tiles, so the two skills work hand-in-hand.

Philyshy can teleport to a target location and heal the squad equal to 250% of her current attack. She also gains a shield equal to 30% of her max HP, and her healing power is increased by 15% for every enemy within three surrounding clusters of the teleport location. Philyshy rewards aggressive play by teleporting directly into the battle, and even if you take some damage her equipment skill automatically regenerates HP at the start of each round, making her a very versatile support unit.

Chloe’s active skill grants her a concerto mark and increases the squad’s attack power by 0.5% for every blue tile on the battlefield and each concerto mark she has, for two rounds. The concerto marks are not consumed at any point, so the more she uses her active, the stronger your squad will be.

Victoria is based all around her chain combo, which deals damage and inflicts bleeding for two rounds. Her active skill deals 250% damage to the nearest three enemies, and if there’s only one target, the skill will ignore enemy defense. She recovers HP based on the damage dealt, and damage is increased by 10% for every stack of bleeding. She’s one of the top support units right now, able to dish out big damage and healing.

Though classified as a support unit, Odi is a powerhouse, capable of dealing high amounts of damage. Her active skill deals 400% damage to all enemies on the field, and inflicts them with slow and poison. If the initial burst of damage doesn’t kill them, either the poison or your squad mates will!

Related | Alchemy Stars’ Charon: Everything you Need to Know

Uriah is a support unit that is capable of powering up tiles. Her active restores HP equal to 70% of her max HP, and if there is any over healing, the nearest green tile is converted into an enhanced tile. This synergizes well with her equipment skill, which recovers HP equal to 100% of her current defense when she passes through an enhanced green tile.

Nadine’s active skill places a lantern down on her tile, locking it to yellow for two rounds. Whenever someone passes through, they recover HP equal to 180% of Nadine’s attack. Her chain combo is a direct heal, so she also has healing covered. Because of her versatility, Nadine is a great thunder support.

Those are some of the best Supports in the game right now. If you have any other units you’d like to mention, please let us know in the comments below! 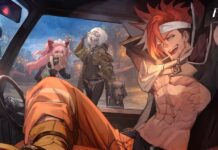