Home Game Guides Zapdos in Pokémon Unite: What It Does, Why It’s Important 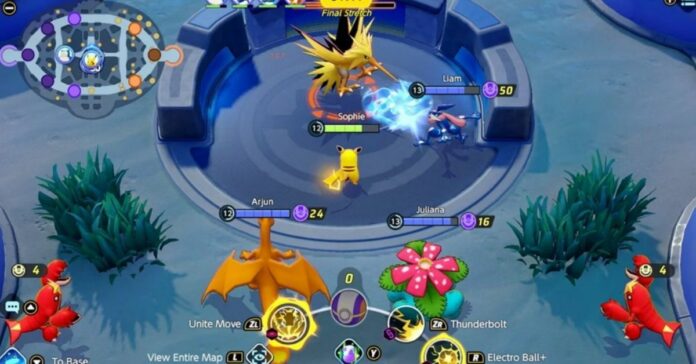 Pokémon Unite is a new free-to-play MOBA. This game allows you to become a Trainer of Pokémon. You will need to train your Pokémon and improve your skill and understanding of the game. However, you may face some formidable opponents and not all of them are going to be from the opposing team. There are 3 boss Pokémon in Pokémon Unite and you can find them across the map. Today we are going to talk about Zapdos, one of three boss Pokémon.

Where to Find Zapdos in Pokémon Unite

Zapdos in Pokémon Unite is a formidable opponent. It is nearly impossible to defeat it one vs one, so you should bring your teammates. But don’t be afraid as Zapdos is located only near his spawn point in the center of the game map. The legendary Pokémon spawns there after 8 minutes of match time passed. It doesn’t tend to go somewhere else. So you may not fear to face this monster during your movements but be careful near its lair.

RELATED: How to Get and Use the Shell Bell in Pokemon Unite

Zapdos in Pokémon Unite is one of three boss Pokémon. You will need to bring your teammates to defeat it. It will be a very hard fight and one of you may die, especially if guys from the opposing team managed to interrupt your battle. But the reward is worth it as all boss Pokémon give a great buff to your team.

RELATED: Are there Bots in Pokemon Unite? Answered

After the victory, the player who last hit Zapdos will be rewarded with 30 Aeos Energy and 20 Aeos Energy will be given to the other teammates of this Pokémon. 110 Aeos Energy in total. The second reward is a special effect that makes all Pokémon in your team score points instantly. The last is that a powerful lighting bolt will strike each Pokémon in the enemy team and deal damage. That was all about Zapdos. Good luck in your further matches.

Zapdos in Pokémon Unite: What It Does, Why It’s Important