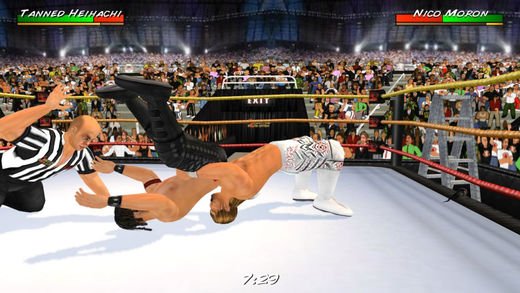 Mdickie, the creators of the popular Hard Life prison sim have just launched Wrestling Revolution 3D, an extremely ambitious wrestling simulation game that will certainly turn a lot of gamers into diehard fans. With extremely complicated mechanics and a ton of things to do, the game might seem discouraging for some, but if you give it a chance, you will get to love it. And we are here to help you out a bit by sharing with you a complete set of Wrestling Revolution 3D cheats and tips to create the ultimate wrestler.

So if you want to start winning more matches and become a true champion, waste no time and read our Wrestling Revolution 3D tips and cheats for the iPhone and iPad game by Mdickie!

Explore a lot
It might sound silly to start off with a “tip” like this one, but it’s really the only thing that I can start with: the game has so many options and features and hidden things and so on, that you will always be surprised to find something new. So explore, try everything in the game, try picking up the strangest objects, try out all the possible combinations when attacking, running and attacking and so on. There’s a ton of things to discover and chances are, no matter how much you have played the game, you still haven’t experienced them all yet!

Speed up the game
The game’s options offer you a lot of customization options, and you should start by increasing the speed. The default is 100%, but the game is a bit low at that speed. Set it up to at least 150% and the game will move in a more natural manner.

Learn the controls
Although there are simply a ton of control combinations you have to master, start with learning the basics. Here’s a short recap of the basic controls:

Customize your wrestler with fast moves
The thing you should do when selecting your wrestler’s moves is to always opt for the ones that have the fastest animation. The slower and more complex the move is, the more difficult for your wrestler to pull it out. So go for quick animations which will help you tremendously in the game and give you the advantage.

Training is not optional
You might want to get straight into the action, but the training is a must play in this case, otherwise you will be left pretty clueless as what to do during the fights. And trust me, there’s a ton of things you can do!

Pick up objects
If you can do it, leave the ring as fast as possible and search for some objects – bats, microphone, anything and pick them up to hit your opponents. You will not only look way cooler, but you will also cause more damage.

Nice and easy wins the match
I know that the more complex moves are looking a lot better, and the grabs and rolls and jumps are simply awesome, but they’re also pretty difficult to pull off, so go mostly for basic attacks until you get the hang of the game and can perform the more complex moves easily. Take advantage of the Special mode whenever it’s triggered, since your wrestler is better during that time and you will win more events than you used to!

These would be for now our Wrestling Revolution 3D cheats and tips for this extremely complex game. I am sure that there are many things to be added, so comment below!