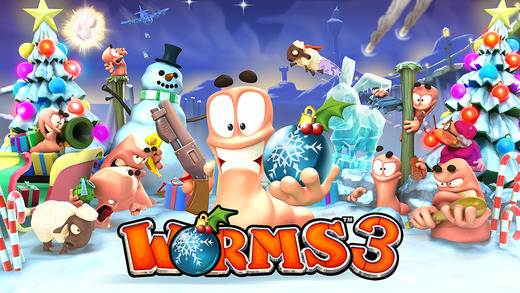 The new Worms 3 update is a Christmas themed update that will bring some of that festive mood into the game. Alongside your typical Christmas gift, players will also be able to call Santa to make some strike based attacks and more. The new update also includes some new hats and gravestones that will make your next Worms 3 games just perfect for the holiday season.

The latest non-seasonal Worms 3 update has been released around a year ago on the App Store. This update included cloud saving support to allow players to use their save files across multiple devices, iOS 7 controllers support and more. The introduction of controller support was quite welcome, giving player more controls options.

Worms is one of the longest running franchises still active. The first entry of the series has been released 19 years ago on Commodore Amiga and PC, before being ported on several other platforms.

The basic gameplay premise hasn’t changed much over the years. Players will control teams of Worms trying to take down an opposing team with a variety of weapons. Since the game is not played in real time, gamers will have plenty of time to aim and hit their opponents, with the strategic elements being real meat of the game.