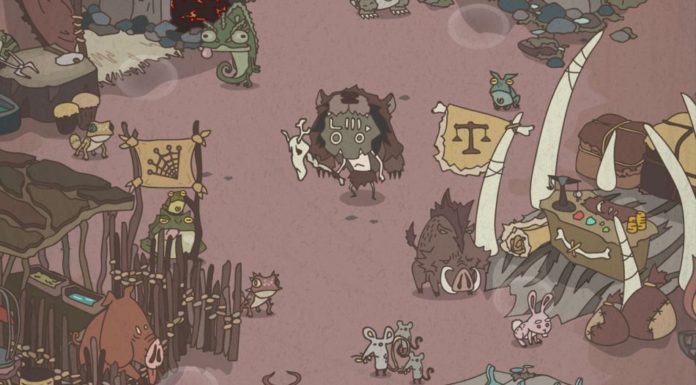 Wild Tamer is an unique RPG game for mobile created by 111%, with a style that reminds me of the equally beautiful Don’t Starve: Pocket Edition. And in today’s article we’re going to check out some Wild Tamer cheats and tips in a complete strategy guide to help you tame all animals.

With tens of animals to collect and various areas to explore and conquer, Wild Tamer’s unique approach and style really make it stand out from the crowd. There is a bit of grinding involved in order to get there to the top, but it’s fun and well done.

And if you want to get better at this game and know everything there is to be known about it, read on for some Wild Tamer tips and tricks in our complete strategy guide. Create the ultimate druid!

Complete quests for diamonds
You need the premium currency – diamonds – in order to do two major things in this game: increase the size of your animal followers (which makes you stronger) and opening the Mask Gatchas which give you more masks for the druid with awesome bonuses.

However, unlike most other free games on mobile, Wild Tamer doesn’t give you many options to get free diamonds. The easiest way to do it is by completing the quests and micromanaging everything.

So make sure that you go through these quests as fast as possible and claim the diamond rewards to help your druid get better and stronger. 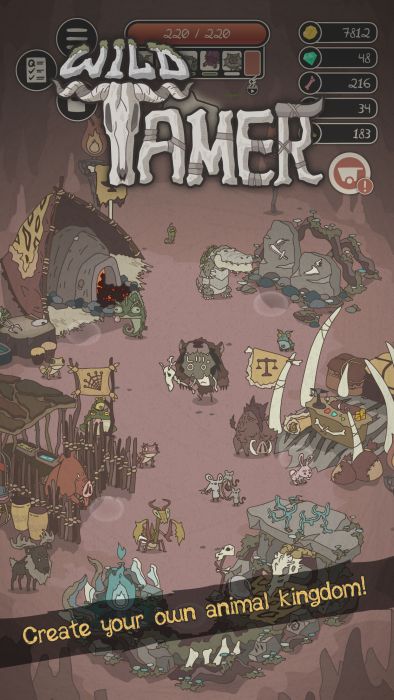 Alternately, you will find diamond mines on the map which allow you to watch ads for a bunch of diamonds, which is totally worth it!

Don’t turn materials you need into gold
There are three types of materials that you can collect during your adventures: the red bones, the blue fangs and the yellow feathers. And you will usually need a lot of these to buy and upgrade equipment and other things in the game.

Therefore, even though you have the option to do so, it is rarely advisable to trade these rare items for gold, unless you really have an excess of them and you need a lot of gold.

Normally, the starting red bones get obsolete relatively fast, so after a while it’s safer to sell them if you really need the money.

Don’t forget that you can get these special materials by destroying animals on the map (the rarer and more advanced the animal, the better the material you get), but you can also watch ads every now and then for a chance at some materials or gold. 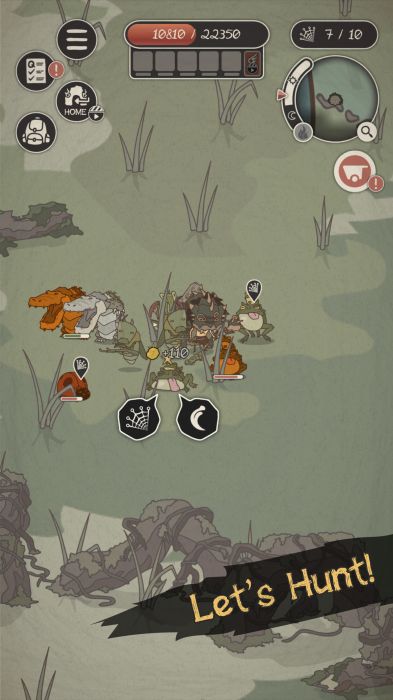 Level up your Animals
You should focus on leveling up your animals, one at a time. This is tedious work and requires a lot of visits outside, since you level up animals by destroying the required number of the said animal during your adventure outside.

Since you can equip a maximum of 5 animals, this is the number you should be working on constantly – and as soon as one becomes too weak in battles (such as the starting Mouse), stop focusing on it and move on.

However, since the inventory space is really limited, it’s not a good idea to have 5 different animals in your squad – so focusing on your 3 main ones is usually a good idea.

Go out and attack them over and over again, rising the counts of animals of that type you destroy and keep leveling them up to make them stronger and even more useful in battle.

Level up your Items
Another important thing for you to do is to buy new gear for your druid and upgrade it a few times. Don’t spend too many resources on the early items, though, because you will soon have enough resources to get something better.

For example, in my game, I didn’t have to upgrade the starting weapon and armor past level 3, as I bought the Turtle Axe and Shell relatively fast. Even those, I only got to level 5 each before moving on to the Toad Mace… and so on.

Once you have enough resources to unlock the next weapon, it usually gives you a bigger bonus than the one you have, even with a few upgrades. This is why you need to find the right balance between upgrading existing weapons and saving enough resources for the more advanced ones. 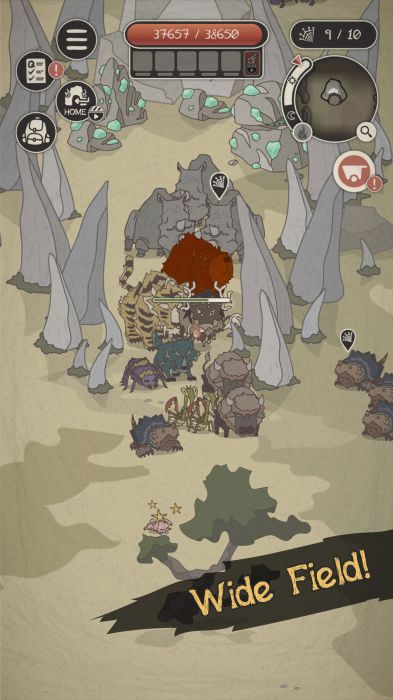 Build a balanced army of animals
There are a ton of animals available to recruit in Wild Tamer (once you unlock them), and only a limited number of spaces in your inventory – at least if you don’t pay for some gems.

As a free-to-play gamer, you will find it really difficult and expensive to get past the 18th slot in your inventory, even after playing for a long while, because the costs are huge. And with such a small number of slots open, there’s not a lot you can do in terms of variety.

However, the game allows for a maximum of 30 creatures if you have the resources to unlock all the inventory slots and this gives you the chance to play a bit and have a varied army.

The trick is to always use your biggest and best animals into battle, mixing melee and ranged units to deal maximum damage and be able to counter any type of animal (or boss) out there, knowing that support units pay a big role in the game as well.

If you don’t have many inventory slots, I would say that trying to mix and match more than 3 animals at a time might be overkill as you won’t have the numbers to make them count – so make sure to always use your 3 best and keep making them better through constant combat. 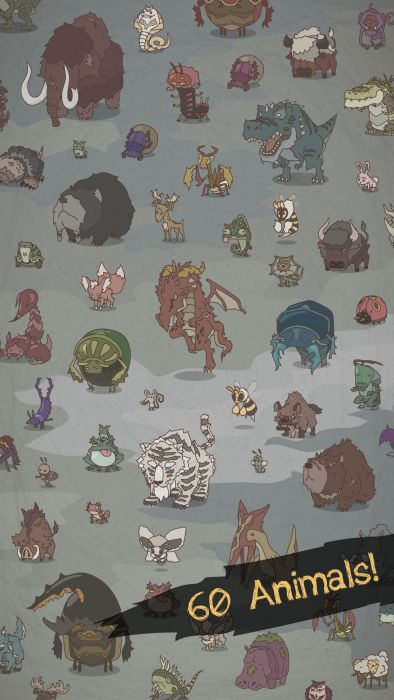 How to unlock more animals
You unlock new animals in Wild Tamer by defeating them in battle. As soon as you have defeated a new type of animal, you will be allowed to unlock it and recruit it back at your own home base.

In order to unlock more animals, you simply have to explore the map – the farther you go, the more animals you will get.

Use portals to teleport around the map
When you go outside, you don’t have to keep on walking the long distances. Instead, you can use the portals that are scattered all over the map to get from a point to another faster.

However, in order to be able to use a portal, you need to have discovered it previously. So it’s a good idea to try and play and explore the map with this strategy in mind: that of reaching all portals as soon as possible.

In order to know the location of the Portals on the map, as well as that of the other important places (like the recovery pools or rocks), you can tap the magnifying glass icon at the bottom right corner of the map, when you’re outside your home. Then simply visit a portal and use it to teleport to any location you have already discovered on the map.

Capturing animals vs killing them
When fighting the animals outside, you have two options after defeating some of them: either capture them (and add them to your followers) or destroy them and turn them into resources.

You should find the right balance between doing either of these two operations, because if you sacrifice too many, you will end up depleting your army and you will have to buy them again – which is pretty expensive later on. However, you can’t work exclusively on capturing all animals, because you need the resources for new items and upgrades.

The best way to approach this is to farm on lower level animals for resources and move on to larger ones when you need to level them up and earn more coins.

For example, once you unlock the goat in the game, destroying mice is a piece of cake – and a really easy way to get the bones you need for upgrades.

The same thing goes for most animals in the game: when you have animals that are two levels above them, they can be farmed for materials.

And these would be our Wild Tamer tips and tricks. If you have additional strategies that work well in this mobile game by 111%, don’t hesitate to let us know by posting a comment below.