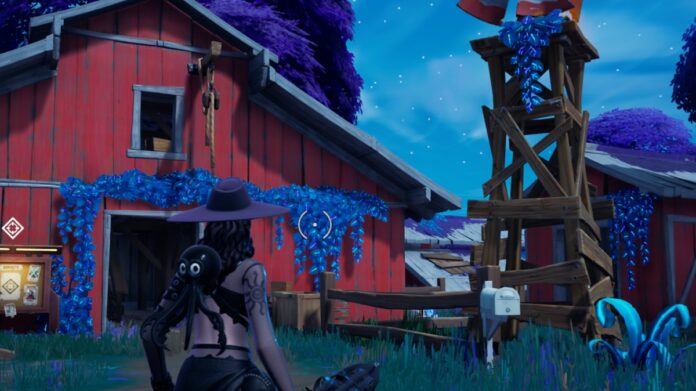 Fortnite Chapter 3 Season 3 has seen a few map changes and colourful locations added. To encourage players to visit the new landmarks, use the weapons and interact with new features and mechanics, Epic have added weekly quests to complete. Week 4 sees players running down opponents with a vehicle, chopping down trees with a Ripsaw Launcher, and planting Reality Seeds, and much more. Check out the guide below and find out where to find Sunflower’s Saplings and Fungi Farm in Fortnite, and complete one of the Week 4 Quests!

One of the Week 4 Quests requires players to plant a Reality Seed at one of two landmarks: Sunflower’s Saplings or Fungi Farm. As these are Landmarks and not named locations they cannot be found easily on the map. The first landmark we found was Fungi Farm, situated southwest of Greasy Grove:

This is perhaps the best place to complete the challenge as it is easy to find Reality Seeds from nearby Reality Saplings, or from Reality Seed Pods. It also has good loot and bouncy mushrooms to gain shield while you are there.

Related: All About Butter Bloom in Fortnite Chapter 3 Season 3

The next location is Sunflower’s Saplings, which is located near the barn and collection of bushes north of Coney Crossroads and west of The Daily Bugle:

This is another good location for loot if you decide to drop here, although it is not so good for finding a Reality Seed (unless someone else has planted a sapling nearby). Once you have arrived at either landmark, plant your Reality Seed by throwing it at the ground:

Only one landmark needs to be visited and one Reality Seed planted so once you have done that the quest is complete! Good luck.

Where to Find Sunflower’s Saplings and Fungi Farm in Fortnite