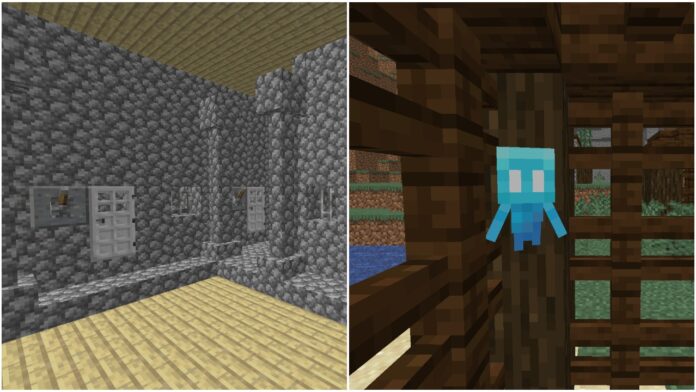 Allays are playful and melomaniac spirits in Minecraft. These flying creatures love listening to music and searching for items. Unfortunately, allays are rare mobs and encaged by evil illagers. Players will have to face illagers in order to find allays. We have prepared a quick guide to help you find allays in Minecraft.

The only place to find allay is illager structures. Allays are locked inside prisons in pillager outposts and woodland mansions. Sometimes, pillager outposts generate with a wooden cage. This cage can include an iron golem, or three allays.

Pillager outposts are not the best place to find as they generate randomly, and players cannot pinpoint their location in survival mode. If players fail to locate a pillager outpost with allays, they can search for woodland mansions using a woodland explorer map sold by cartographers. These lavish mansions have multiple hidden jails that may contain 1-3 allays.

As of now, allays do not eat any food and are not attracted to any specific item. After finding an allay, players can use a lead to bring the allay to their base.

Related : How to Utilize the Allay in Minecraft Bedrock

What is Allay in Minecraft

Allay mob is one of the major features of Minecraft 1.19 update, titled The Wild Update. After defeating Glare and Copper Golem, Allay became the winner in the Mob Vote held at Minecraft Live 2021.

This spirit-type mob looks similar to vexes but has an opposite nature. It is a friendly mob that collects items given by its owner. After collecting items, allays brings the item back to its owner. It can also bring items to a note block upon hearing a note. Players can use this feature to make interesting collecting systems.

Where to Find Allay in Minecraft Bedrock Edition