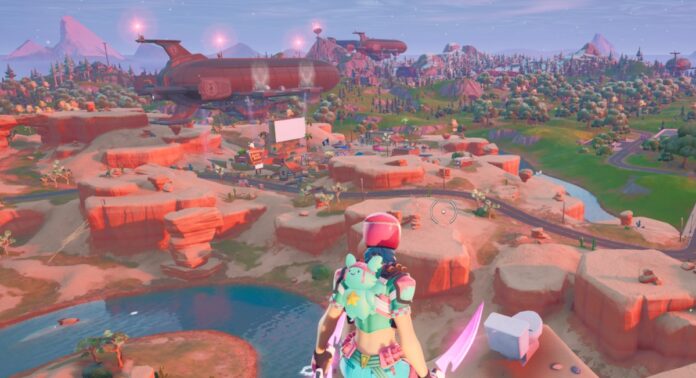 Fortnite Chapter 3 Season 2 has started off with some exciting changes to your favorite game. There are new locations, new gameplay features, new weapons, and new quests to complete! As always, many of these quests and challenges require you to visit and explore some of the latest additions to the map, including the massive IO Airships floating in the sky above some named locations. Players are asked to search chests in the IO Airships, deal damage to IO Guards, launch from one the Siege Cannons, and more! To find one of these huge new features, check out our guide below.

What Are The IO Airships & Where Are They Located In Fortnite Chapter 3 Season 2?

The Airships contain chests, ammo boxes, IO Guards, and various ways to move around the airship or launch away. You can use Siege Cannons by loading into them and shooting yourself away across the map. The huge propellers have an updraft that lifts players up into the air, and various ziplines are available to move up and around the airship.

It is also worth visiting each IO Airship for the extra XP you gain by discovering each one. There are 6 different IO Airships in this new season, each one located at a named location.

Related: How to Plant a Data Scraper at the Tail of an IO Airship in Fortnite Chapter 3 Season 2

IO Airship at The Daily Bugle

Those are all the IO Airship locations in Fortnite Chapter 3 Season 2 so far! Let us know in the comments below what you are enjoying about this new season.

Where Are The Airships Located in Fortnite Chapter 3 Season 2