Home Game Guides When is Tilted Towers Coming Back in Fortnite Chapter 3? 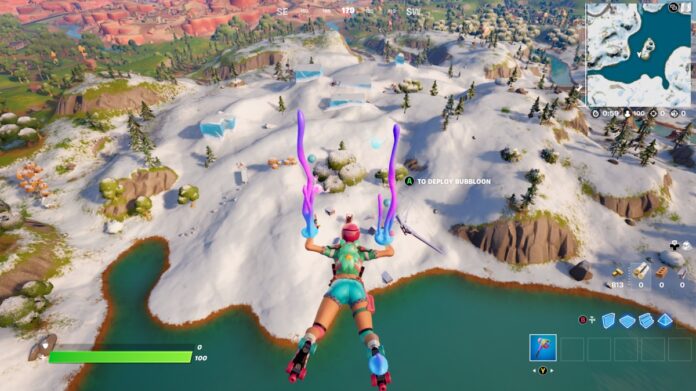 Only the OG Fortnite players will remember this classic point of interest! Tilted Towers first became part of the Fortnite map in 2018 and has been through some big changes. It was hit by a meteor, had buildings destroyed by Kevin the Cube, covered in snow, suffered through an earthquake and a volcano, and had 3 major rebrandings as Neo Tilted, Tilted Town, and Gotham City.

When Chapter 2 Season 5 began, Tilted was combined with Salty Springs to create Salty Towers. Eventually, the longest-lasting POI in Fortnite was gone. Until now…

Is Tilted Towers Coming Back in Chapter 3?

Tilted Towers is set to return, making a lot of fans very happy. Known as the place to drop for every sweaty player—or those with a death wish—Tilted Towers has been frozen in time for a while now.

Tilted Towers is currently ‘Frosty Fields,’ an unnamed location covered in snow, full of loot, and a couple of campfires. It’s not the most popular drop location right now, but that will soon change!

Related: How to Spectate in Fortnite

Many players noticed this season that the big blocks of ice look remarkably like they could be buildings, and as the chapter has progressed, the snow has been melting, revealing these blocks are definitely as big as towers!

Datamining has shown that Tilted is returning as the ice thaws, with stage four of the snow disappearing happening right now. It is said that Tilted Towers will be revealed on January 18, 2022. This date is no surprise, as it is actually the anniversary of when we first had Tilted Towers added to the game. Happy birthday, Tilted.

Will you be dropping on the new and improved Tilted Towers? It is bound to be a very popular location to start at when it appears, so only the bravest will be there!

When is Tilted Towers Coming Back in Fortnite Chapter 3?