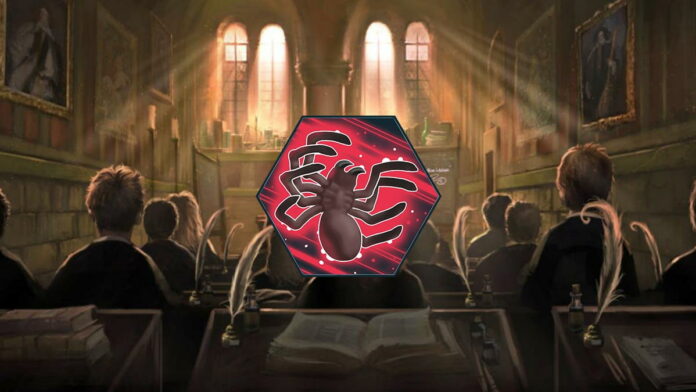 One of the classes you can take at Hogwarts is the Care of Magical Creatures class. As you can probably guess from the name, students will be learning the fundamentals of taking care of otherworldly animals.

Similar to the other classes at Hogwarts, there will be occasional exams that test your knowledge about the class. Since you’re dealing with so many animals in this class, it can be difficult to remember what does what.

One of the possible exam questions you can get is:

“What spell wards off spiders?”

The answer to this question is the spell Arania Exumai. If you’re curious, arania is Latin for “spider”, and Exumai might be derived from eximo, which is “banish”. This spell was created for the movie adaptations of Harry Potter, as it didn’t appear in any of the original novels.

In Harry Potter Hogwarts Mystery, we learn that the origins of this spell come from Jacob’s sibling and their efforts to find the legendary Cursed Vaults. Once Jacob’s sibling learned that one of the vaults was near the spider-infested Forbidden Forest, Patricia Rakepick taught them Arania Exumai.

Despite this spell being oddly specific and very situational, it has nevertheless proved to be a helpful spell in a wizard’s repertoire. You just never know when you’re going to have to fend off an Acromantula, and you definitely don’t want to face one with no protection.

That concludes our guide on the spider warding spell in Harry Potter Hogwarts Mystery. If you have any other tips or questions, let us know in the comments below!

What Spell Wards Off Spiders in Harry Potter Hogwarts Mystery