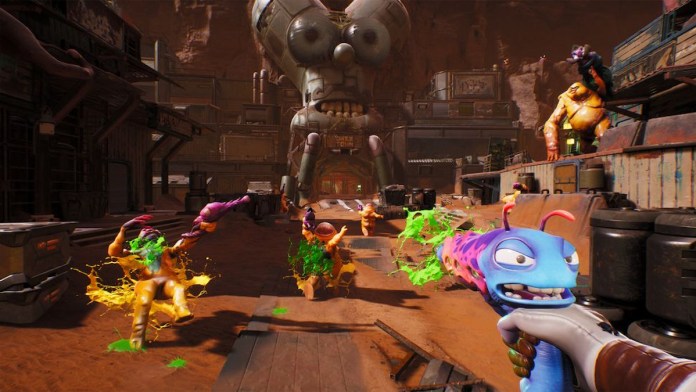 High On Life is an adventure sci-fi FPS with a twist! This hilarious new game was created by Justin Roiland, who many of you may know as also being the creator of Rick & Morty, with development and publishing by Roiland’s own company Squanch Games. As you can expect, High on Life is as jam-packed with jokes and action as Roiland’s other work. Find out more below to find out what is the ‘Morty Voice’ gun game? High on Life explained.

What is High On Life?

Justin Roiland created High on Life in his unique style of madcap and often crude humor, just like his TV animation series Ricky & Morty. Not only is this new game Roiland’s conception, he was also heavily involved in the majority of its creation and development. This is pretty evident when you start playing.

The game is set in a sci-fi world where an alien cartel invades Earth with the intention of using the inhabitants as drugs. The player is a bounty hunter who travels the universe, trying to save humanity, taking out threats as they go. Their weapons are talking sentient weaponry that react to what the user is doing.

The player can use any of the 4 living weapons, or Gatlians, each with its own primary, alternate, and special modes. Because these weapons are more than just a tool, they can also be very helpful with solving puzzles. During the game, players can interact with NPCs, change up what Gatlian they are using, upgrade and gain new abilities, and so much more!

Related: Does High On Life Have CO-Op Play?

Justin Roiland voices one of the main guns players use during the game, but this almost did not happen. According to Roiland, he was set against voicing a character but his team argued he must do it as it had become “kind of our signature at this point”.

When Roiland spoke to Charles Harte at GameInformer.com, he said “Alright I’ll do it… I knew it would be helpful from a production standpoint for me to do it.” And so Roiland is the voice many players will have recognised when using the gun ‘Kenny’.

Related: How to Equip Mods in High on Life

The guns are High On Life’s whole schtick, and each one is voiced by a comedian. This means the voice lines you will hear when playing will be mostly improv, making the game feel authentically funny and not just full of a bunch of pre-rehearsed quips.

Roiland wanted a video game with the same high quality he demands from his animations, and it seems he got his wish. High On Life is available to play on Xbox One/Series S/X (find it on Game Pass!) and on PC.

What Is The ‘Morty Voice’ Gun Game? High On Life Explained