Home Guides What is the Best Armor in Terraria? Answered 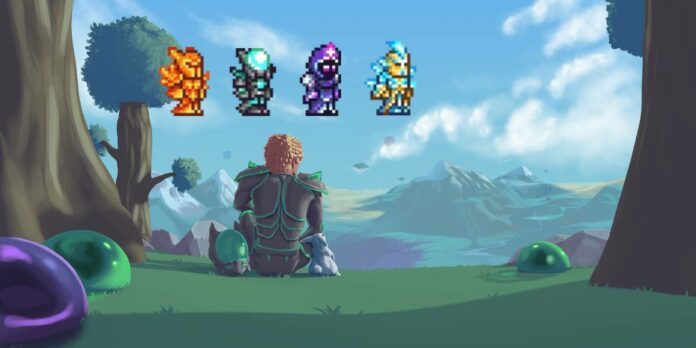 Armor is super important in Terraria, since your character doesn’t gain any levels. Without armor, you will go down to even the weakest enemies, so it’s in your best interest to craft armor as soon as you can. Terraria’s main adventure is pretty lengthy, so you may be wondering what the strongest armor set is. Well, we’ve got the answer for you here in our Terraria guide on what the best armor is!

What is the Best Armor in Terraria?

The best armor in Terraria is actually a little more complex than you think! Technically, there are four different armor sets that can be considered the best, as they are the ultimate armor sets for the four different classes in Terraria. These sets are the armor pieces you craft out of the Luminite that drops from the Moon Lord, the ultimate final boss of Terraria. The four sets are:

This fiery set grants the user +29% melee damage, +26% melee critical hit chance, +15% movement and melee attack speed, and makes enemies more likely to target you. The armor also generates a solar shield over time that protects you from harm, or you can expend the shield to ram enemies at high speed.

This spacesuit-inspired set grants the user +36% ranged damage, +27% ranged critical hit chance, +10% movement speed, and a 25% chance to not consume ammo. You can also double tap your down key to activate the suit’s stealth mode, which increases your range and lowers the chance of enemies targeting you, at the cost of slowing you down.

This dazzling set grants the user +26% magic damage, +16% magic critical hit chance, +10% movement speed, +60 mana capacity, and lowers mana usage by 15%. Attacking enemies with this set equipped has a chance to spawn mini nebulas that can be collected to give yourself damage, life, or mana buffs.

This spectral set grants the user +66% minion damage and +5 minion capacity. A Stardust Guardian will be summoned to aid you, and you can double tap your down key to direct the guardian to a specific place.

Related | The Solar Eclipse Event in Terraria: How it Works, How to Trigger It

How to Get the Best Armors

As mentioned, you’ll need to take down the Moon Lord multiple times in order to craft these armor sets. You’ll need lots of luminite, which of course only drops from the Moon Lord. Each set costs 36 luminite bars to craft, with the Moon Lord dropping roughly 70-110 luminite per fight, depending on the difficulty. One luminite bar requires four luminite.

To fight the Moon Lord, your world must be in Hardmode, which means you must have defeated Wall of Flesh. After you defeat The Destroyer, Skeletron Prime, and The Twins, you must fight Plantera in the underground jungle. After that, you must explore the jungle temple and defeat the Golem inside. Upon the Golem’s defeat, the Lunatic Cultist will spawn at the Dungeon entrance.

The Celestial Pillars invade your world after you defeat the Lunatic Cultist. Four Pillars will spawn in different regions of your world, and you must take down all four. Be warned — as soon as the final Pillar goes down, you have one minute until the Moon Lord spawns. Once you defeat the Moon Lord, the Lunatic Cultist will respawn in the same spot, allowing you to farm for the Luminite and fragments.

Each pillar drops the fragment that pertains to it. For example, the Solar Pillar will drop only Solar Fragments. Each armor set costs 45 fragments to craft, and the Pillars drop roughly 12-60 (24-100 on expert / master mode) fragments per kill, so you may have to farm them multiple times. The good news is that since you HAVE to kill all four Pillars to make the Moon Lord appear, you’ll be able to make all four sets easily.

Those are the best armors in Terraria. Do you have any other questions or tips about them? Let us know in the comments below!