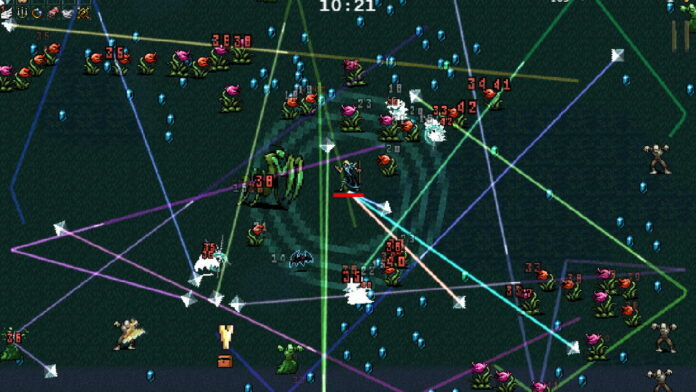 Vampire Survivors is a top-down survival roguelike pitting you, a lone warrior, against the creatures of the night. Use a variety of weapons to mow down massive hordes of undead monsters to level up and grow stronger. Today, we’ll explore all the weapon and item options in our Vampire Survivors synergies, item combinations, and evolution guide!

There are two types of equipment you can obtain during any run in Vampire Survivors: weapons and passive items. Weapons will add new attacks to your arsenal, while passive items grant you a bonus attribute or effect.

Your character can hold up to six weapon and items each, for a total of twelve items altogether. You can find equipment inside chests or earn them through level ups, which is the most common method. Choosing the same item again will level it up, increasing its potency.

Vampire Survivors has a lot of basic weapons to utilize, and they each synergize differently with the passive items you can find. We’ll show you a list of the best items for each basic weapon in the game, but first we need to talk about a couple important items.

The following items synergize extremely well with practically every weapon in the game due to their powerful effects, so you should snatch them up as soon as you see them. They are:

For every other passive item, some work better than other for specific weapons. Here are some good combinations and synergies:

Weapons can be evolved, which essentially combines them with a passive item that improves the weapon’s strength dramatically. Evolving weapons is the key to hitting huge power spikes with your character, so we’ll walk you through the process.

First off, you need to upgrade your weapon to level 8. Once you do that, you’ll also need the matching passive item in your inventory as well, though it doesn’t need to be level 8, save for special combinations. Once you have both the weapon and passive item, defeat any boss monster after you’ve survived for at least 10 minutes, and pick up the chest to evolve your weapon.

If you don’t know the evolution combinations, it might be a little confusing, as you won’t know what weapons and items to look out for. Here are all the different combinations so that you can plan ahead!

* Infinite Corridor & Crimson Shroud both require their passive items to be at max level.

In addition to the normal evolutions, there are also weapon unions. Unlike evolutions, weapon unions combine two weapons together to form one powerful weapon, while also freeing up a weapon slot.

That concludes our Vampire Survivors synergies, item combinations, and evolution guide. That was quite a lot to get through, but we hope we helped you understand Vampire Survivor’s item system more. It’s very fun to see what kind of combos you can come up with, so experiment! What’s your favorite weapon combo? Let us know in the comments below!